If you were any sort of gamer in 2002, then chances are you were playing the hell out of Final Fantasy X. Friends, family, colleagues, classmates, and nearly everyone in between were ranting and raving about Squaresoft’s masterpiece. Being an angsty teen with a contrarian attitude, I decided to fight the power and play every RPG on the PlayStation 2 except Final Fantasy X. I started a new file once or twice after my teenage years, but something about the game never clicked. I’ve been through nearly every game in the series, X-2 included, but I still couldn’t find the energy to go through X. Well, that is, until now. What changed? Aside from missing some Final Fantasy in my life, I really wanted to play a game that could take just the right amount of time to complete. Final Fantasy X fit that bill, and then some. It’s not a perfect ten, but it has a rightful place in gaming history.

I want to start on a high note. The music in Final Fantasy X is a dream. Nobuo Uematsu has provided a soundtrack that perfectly captures the tone and atmosphere of the game’s highly developed world. There is a palpable level of emotion poured into each track; thinking about the soundtrack can take me back to key instances of the game. It’s that powerful. The voice acting in Final Fantasy X is excellent. At the time of its release, it was one of the few games to be almost entirely voiced. The dubbing is off at times, but it’s easy to forgive.

Let’s keep the momentum going. Final Fantasy X still turns heads with its stunning presentation. The graphics can be divided into three areas. The first are the gorgeous full-motion videos that Squaresoft is known for. These occur during key segments of the story. There isn’t much to be said about them that hasn’t already been said. The second area are what I like to call “upgraded normal” graphics. These are presented during the majority of the story events, but they didn’t get the “FMV” treatment. If the camera is focused on one of the main cast members, then they continue to showcase the game’s beauty. NPCs, on the other hand, look like they belong on Easter Island. Finally, when you’re moving Tidus around or are in a battle, you have the normal graphics. But, normal for Final Fantasy X is still quite lovely. Note that I played the PlayStation 2 version – those that want an upgrade can check out an HD version on the Vita, PlayStation 3, or PlayStation 4. 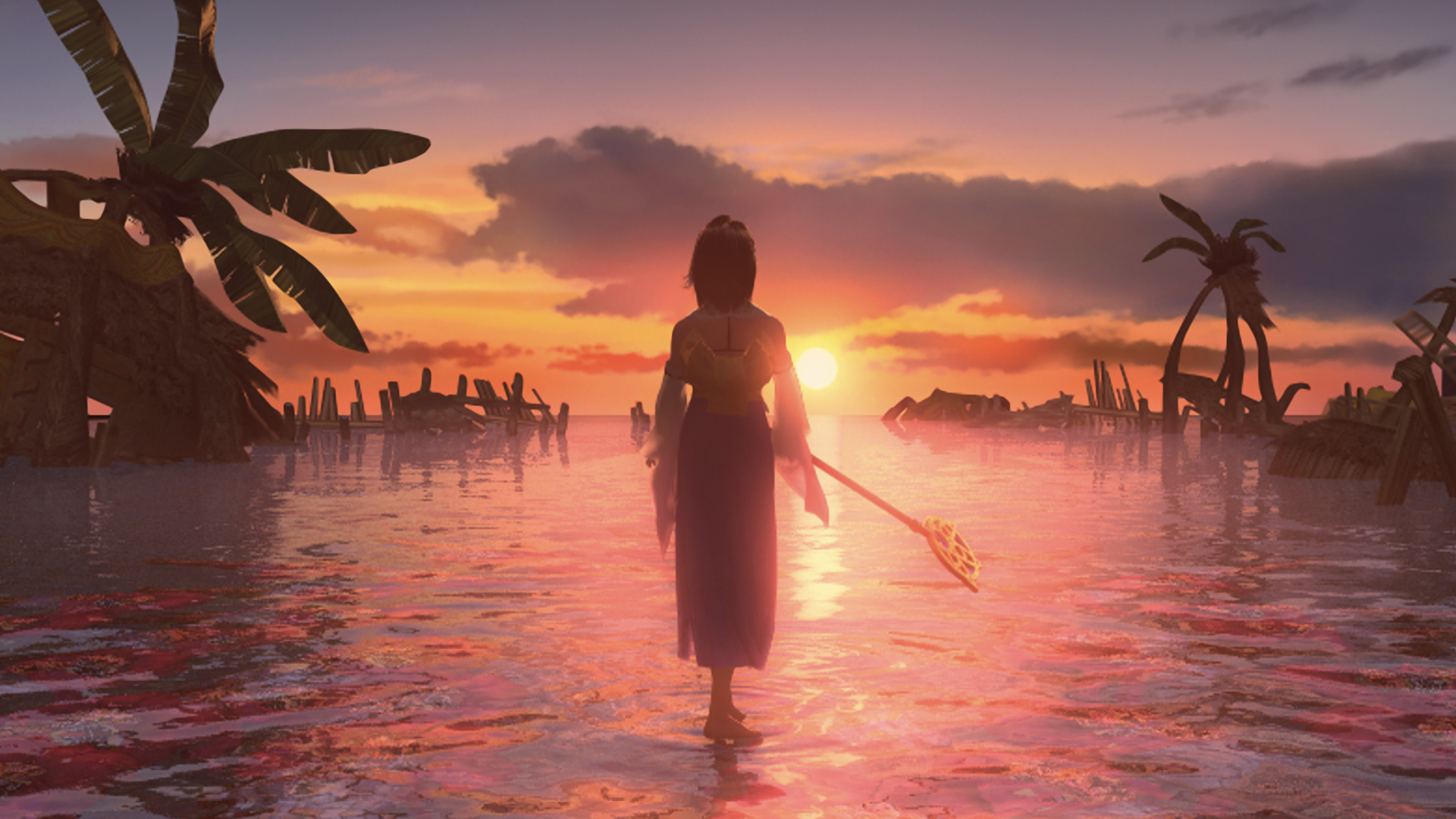 One of the earliest, pretties, and most emotional scenes in Final Fantasy X.

Finally, we have the story. While it has a slow start, Final Fantasy X’s story is one of my favorites in the series. It starts in the sprawling city of Zanarkand before a blitzball tournament. Blitzball is a popular sport that takes place in giant, underwater domes. A promising blitzball player named Tidus is in the middle of a game when a massive entity starts wreaking havoc upon the city. Tidus learns that this entity is called Sin. He ends up getting transported to the world of Spira. With no idea where he is or how to get home, Tidus has a lot on his plate. But, he doesn’t let it show. Tidus remains cheerful and upbeat throughout the majority of this adventure. He meets some interesting faces as he journeys through Spira. Final Fantasy X has one of the best casts in the game; each character is unique, memorable, and, surprisingly, likable. My favorite is Yuna, the heroine of the story. A summoner with a heavy burden on her petite shoulders, Yuna is an absolute delight to have around. One of the aspects of the story that I really appreciated was that Tidus and Yuna slowly but surely begin to develop feelings for each other. It’s beautiful; I like that the Final Fantasy series doesn’t shy away from romance.

Gameplay in Final Fantasy X is where my opinion ebbs and flows tantamount to the watery themes shown throughout the game. Exploration is severely linear. One of the biggest changes from previous Final Fantasies is a lack of a world map. Tidus and his friends will go from one area to the next in one-way street fashion. It’s not until the very end of the game that you’ll receive an airship and, with it, the ability to go back to previous areas. It’s not a deal breaker, but it can be frustrating when you miss a treasure chest or hidden item and want to go back to it. The towns have some chatty people to speak with, many of which will give you free items. Shops have items and equipment for your party. Weapons and armor can be upgraded at the expense of items, but doing so can be a time consuming process since the best upgrades are both rare and costly.

Said equipment will be used in battle. Final Fantasy X’s battle system is one of the better ones in the series. Instead of the traditional Active Time Battle system, Final Fantasy X uses the Conditional Turn-Based system. The nice thing about this is that, when one of your character’s gets a turn, you can take as long as you want to enter a command. On the right of the screen is a timeline showing the turn order. This lets you plan your move accordingly. Up to three characters can participate in battle, but you can swap any character out any time. Similar to Breath of Fire or Wild Arms 2, you can do this without worrying about sacrificing a turn.  Battles move at a brisk clip. While some of the bosses last longer than necessary due to special triggers, most battles are over before you know it.

Actually, “leveled” may not be the best term for Final Fantasy X. Once a character earns enough AP, they can move throughout Final Fantasy X’s growth system called The Sphere Grid. The Sphere Grid is fun, different, limiting, tedious, and rewarding. I both love it and loathe it at the same time. If you were to ask me how I felt about the Sphere Grid one day, my answer would be completely different from the next. When a character gains a Sphere Level, they can move to a new node on the grid. If they are on or adjacent to a node that is filled with something, they can use an item to activate the node. It sounds confusing, but it’s very simple once you see it. Nodes will contain boosts for HP, MP, defense, attacks, new abilities and more. Special spheres and lock spheres are where things can get frustrating. Some nodes are hidden behind rare items. Some characters’ sphere paths have abilities that are easy to miss. Overall, I liked seeing my characters grow via the Sphere Grid, but there were times I was frustrated with it. 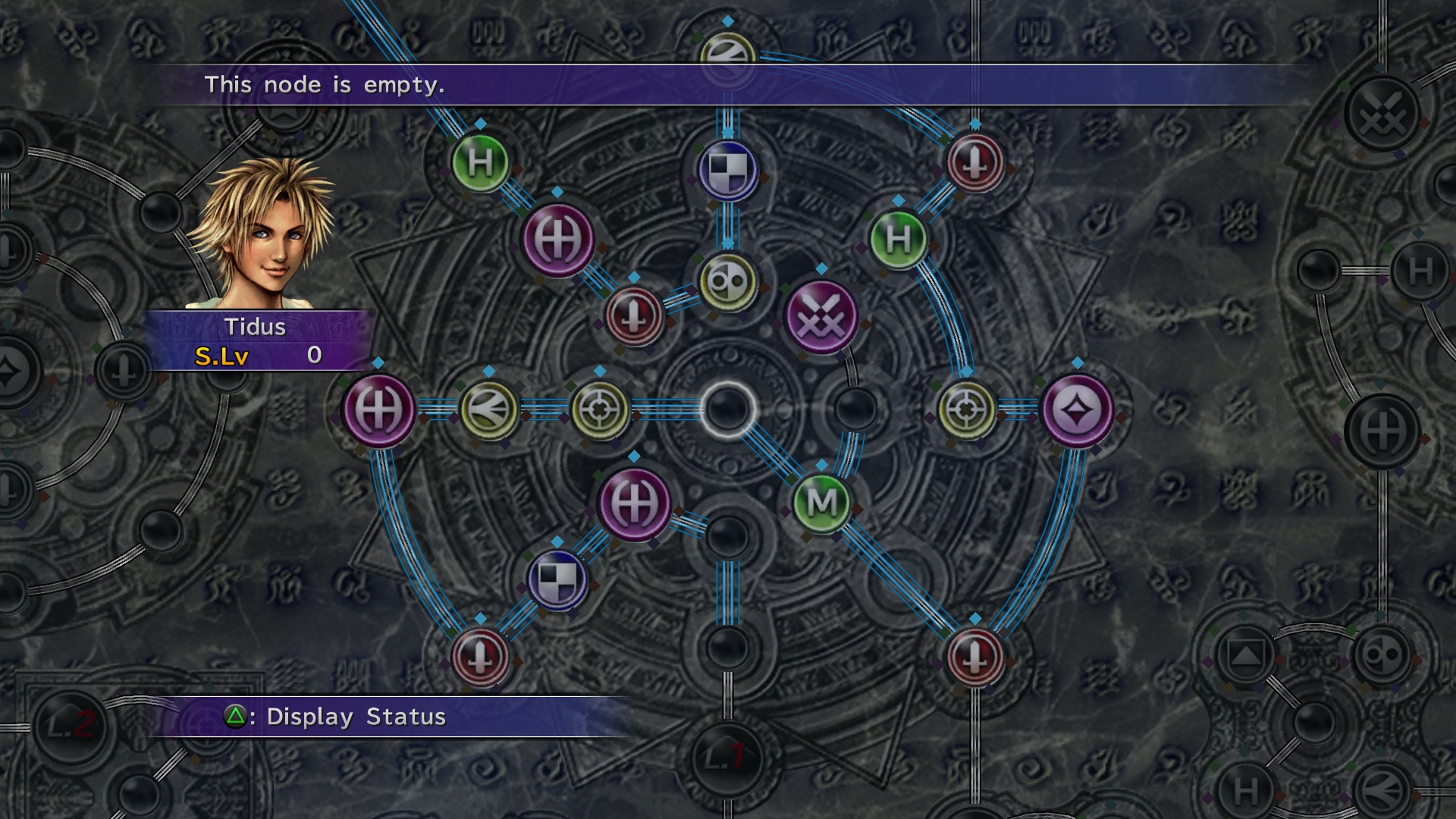 The Sphere Grid. I love to hate it and hate to love it.

I have some other nitpicks about Final Fantasy X that really aren’t worth mentioning, but I do want to mention my least favorite thing: the extras. Blitzball, Chocobo racing, butterfly catching, lightning bolt dodging, monster hunting. These are some of the things you must do in order to fully unlock all the game offers. And, none of it is fun. In previous entries, I would enjoy things like Chocobo Hot and Cold or Triple Triad. In Final Fantasy X, the thought of doing it all is enough to make me shelf the game permanently. With all of its tedious extras, you could be be looking at 150 hours of game time. However, I was able to finish the game and participate in some of the less offensive extras in 50 hours.

So! Here we are. I finally finished this coveted, cherished entry in this long-running series. Better late than never, right? I’m pleased with the way the game turned out, but I’m just as pleased that I didn’t rush to play it like everyone else did. This is a good game, but not a great one. While it does sound tempting to replay it on another console to obtain trophies and see the new content, playing it once on the PlayStation 2 was plenty for me. I recommend it to any RPG fan, but understand that the hype surrounding it all those years ago was misplaced.