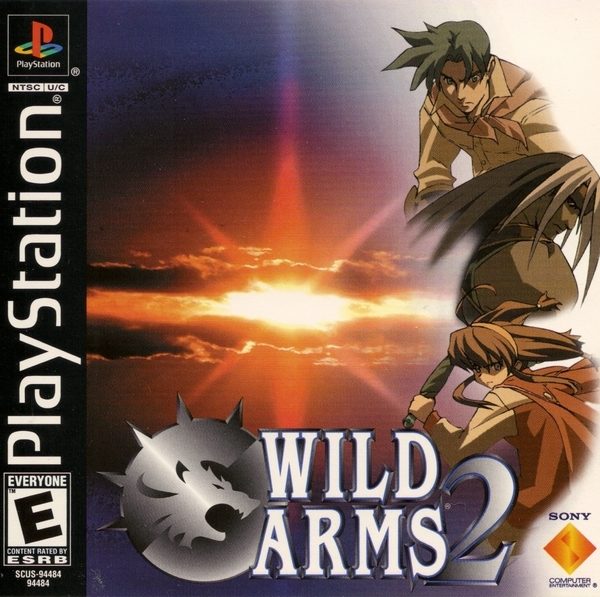 I fear I’m starting to show my age as a gamer. Having fully completed Wild Arms 2, I tap into the age old adage and say to everyone that, “They just don’t make them like they used to.” The “them” to which I’m referring are, of course, RPGs. Truly, Wild Arms 2 is an amazing, wonderful, legendary game that has so much to offer. A questionable translation makes it shy away from perfection. However, everything else that Wild Arms 2 has to offer is enough to make it go down in my book as one of the greatest video games of all time. This is more proof that the Playstation era is indeed the golden era of RPGs. Wild Arms 2: it’s what legends are made of.

Similar to the first Wild Arms, Wild Arms 2 let’s you pick one of three characters at the start of a new game. Upon completing their scenarios, the real fun begins. Before I get into that, you might be wondering who’s in the new trio. Are they able to compete with chemistry that formed between Rudy, Jack and Cecilia? The answer is yes. Ashley Winchester is the first character and protagonist of the Wild Arms 2 world. Wielding a bayonet and various ammunition, Ashley works as a soldier to make a living in the town of Meria. The second character (and personal favorite) is Brad Evans, an ex-soldier on the run from government officials. Once a member of the Slayheim Liberation Army, Brad is a master tactician and has supreme knowledge on heavy artillery. Finally, we have the adorable (and another personal favorite) Lilka Eleniak. Lilka is a crest sorceress in training who is trying to become a master mage like her older sister. Unfortunately, she’s a ditz and gets into a bit of trouble upon finishing the Millennium Puzzle. The three heroes eventually join the anti-terrorist organization known as ARMS and work together to put a stop to Odessa, an organization hellbent on taking over Filgaia.

The fun doesn’t stop as your Odessa hunt begins. Ashley, Brad and Lilka will have three more characters join their ranks to balance out the party. Two of which, Tim Rhymless and Kanon, join during the story. The last character is optional, but finding this elusive diva will add more content to the wonderful story that revolves around Wild Arms 2. Ashley and his crew meet a ton of memorable characters in their quest, all of whom wish to see a more peaceful Filgaia. Putting a stop to Odessa, as expected, is only the tip of the iceberg when it comes to the plot. There’s more than meets the eye with each character that develops supremely well over the course of the game. There’s just one major problem: the translation. Certain things that get said sound awkward, almost as if playing the game in “Engrish” instead of English. It’s nothing that will detract from enjoying the story, though. People who have played this game either scoff at the translation or pay it no mind. Those in the latter category understand that Wild Arms 2 has so much to offer; a couple of misspellings and odd word choices don’t take any of that away.

So, what does Wild Arms 2 have to offer? For one, there’s dungeons. Tons and tons of different dungeons. Each dungeon requires a puzzle to be solved using one of the character’s special Tools. Turn into a mist with Tim to pass through a fence, then change crystals to blocks with Lilka so you can get to a cracked door that needs to be blown up with one of Brad’s bombs. Each dungeon is unique and is usually full of treasures, monsters and secrets. Alongside the story dungeons, there’s a plethora of bonus dungeons, too. Of course, there are plenty of towns in Wild Arms 2. These allow you to shop for new equipment and items, create magic for Lilka using Crests, upgrade Ashley’s and Brad’s ARMs, and upgrade Personal Skills. Personal Skills have positive effects on your characters. You can become resistant to status ailments, increase your stats, up your chances of a critical attack and much more. Upgrading requires the use of Personal Skill Points. You gain one of these for each level gained. The customization is wonderful and allows you to mold your characters as you see fit.

It should be mentioned that both towns and dungeons need to be uncovered first with the Search System. Wild Arms 2 marks the beginning of wandering the world map and pressing the square button to reveal locations. This also allows you to find money (the currency in Wild Arms 2 is called gella) and items. Luckily, the area that gets covered by the Search System is much larger than in later versions. Furthermore, as you progress in the story, you will see blips on your radar that indicate something is close by. Talking to certain townsfolk will also significantly help in discovering new locations. Travel becomes significantly easier as you obtain a hovercraft, a flying fortress and the Wild Arms traditional “airship” Lombardia.

Progressing to get all of this nifty stuff does require something important: battle. Ah, the battle system. The turn-based battle system that stood the test of time remarkably well. I’ll tell you what: developers for RPGs of the new generation should be taking notes from Wild Arms 2’s simple but effective battle system. Battles begin when an exclamation point appears over your head. If it’s red, you can’t avoid the battle. If it’s white or green, feel free to press a button to avoid an encounter. What’s the difference between a white and green exclamation point? If white, the enemy is one you’ve encountered before. If it’s green, it’s a new enemy. Simple things like this keep on cranking up that score for Wild Arms 2. Regarding the battles themselves, you can have three characters in at a time. Once you start having more people join you, you have the ability to swap characters as you’d like without worrying about wasting a turn. As your characters exchange blows with the monsters, they build up Force Points. These allow you to unleash special abilities and commands that are unique to every character. Brad can enhance his heavy artillery, Lilka can increase the powers of items and her magic and Ashley–well, Ashley can do something that is totally awesome. These are just examples. The further into the story you get, the more fun stuff you unlock.

The majority of the time, battles are easy. Even the bosses of Wild Arms 2 can be a cakewalk. An interesting feature about some of these bosses is that they have multiple body parts. Destroying an enemy’s part grants more money and experience points, but in doing so the boss might begin unleashing a more powerful attack. Regardless of whether or not you find a challenge with the story bosses, the optional bosses are an entirely different story. I’m not even sure where to begin in telling you how challenging these gargantuan creatures are, even at high levels. Strategy and preparation will be your saving grace if you decide to fully explore Wild Arms 2 and challenge these foes. The rewards for finishing them, besides a glowing sense of satisfaction, include a ton of experience points and excellent pieces of equipment. While on the topic of optional bosses, it’s important to discuss another important feature of Wild Arms 2: Guardians. Your characters can equip Guardians for an increase in stats as well as the ability to summon them for some heavy damage. You only get a handful in the main story; the rest require you to search all over Filgaia. Thus, there is plenty to do in Wild Arms 2. Whether you’re progressing the story or searching out an optional area, Ashley and his friends have their work cut out for them.

The graphics in Wild Arms 2 are a huge step forward from the original. Alongside more anime movies, you have a wonderful combination of 2D and 3D. The 2D sprites, while simple by design, traverse 3D environments that can be viewed in all angles thanks to the fully rotatable camera. This is not to say that the simple look doesn’t get the job done. The sprites are expressive, colorful and move swiftly. However, the graphic engine shines the most in battle. Not only can you see over 300 monsters in full 3D, you get to see your characters fight them with a variety of kick ass animations that get enhanced by intense camera angles. All of your characters look amazing. The Playstation had some powerful hardware and Wild Arms 2 shows how powerful. On the topic of the battle animation, it’s important to point out another huge part of the game: the music. I leveled my party to the high 80s and never tired of the battle music. In fact, I’d crank the volume up. The music is supreme, a paragon of classics and instrumentals. Certain tracks pay homage to the wild-west theme that the series is known for, full of twangs and whistles. However, most of the music is inspired by anime and JPop. All in all, the soundtrack is one to be remembered. Wild Arms 2 does not have any voice acting, but that shouldn’t bother you when you consider how atrocious most PSX games’ voice acting sounds.

Wild Arms 2 is as fugacious as you want it. You can breeze through both discs in 25 hours, but you will be missing out on a plethora of extras. My file took 60 hours and I felt sad to see the credits roll. After fighting all of the monsters, going through all of the dungeons, learning nearly every skill and uncovering all of the hidden items, I wanted more. Unfortunately, all good things must come to an end. As mentioned, the game does suffer from major translation errors in the script. Another subtle issues include recycled monster designs. Honestly, I’m grasping at straws when it comes to finding minor flaws in this game. I will now look back on Wild Arms 2 with fond memories; the likes of which have the same caliber as SaGa Frontier, Final Fantasy Tactics and Mega Man X4. It’s a game that made me re-realize how wonderful the Playstation era was for RPGs. It’s a game that has all a fan of the RPG genre could ask for. It’s a game that has become one of my favorite games of all time. Wild Arms 2: it’s what legends are made of.