The challenge of this game comes from the mistakes made by Enix. 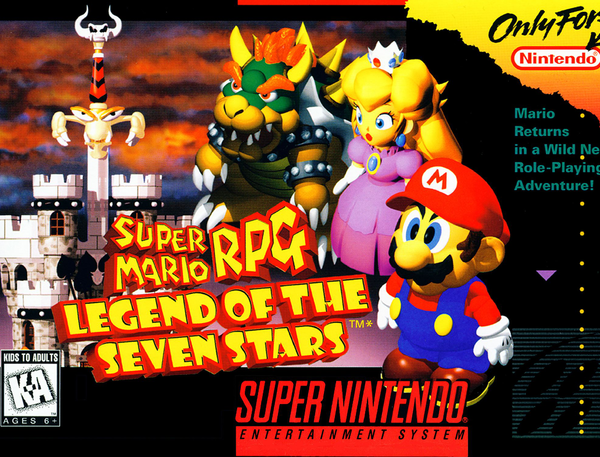 Super Mario RPG: The Legend of the Seven Stars is a game that will cheer you up when you are feeling blue. I know that sounds ridiculous, but it’s the truth. If you’re having a bad day, popping in this colorfully created RPG will bring a bit of joy to your unhappiness. Usually known for entering pipes and stepping on turtles, Mario RPG is a 20 hour adventure that puts the mustached plumber in a new world full of surprises.

The last Mario title released on the Super Nintendo and the last time Square touched anything Nintendo related for a few years, Mario RPG starts off as most Mario games do: the Princess has been kidnapped (AGAIN) by Bowser and Mario is on the scene. However, during the confrontation between the plumber and the dragon-Koopa-thing, a giant sword called Exor breaks through the Star Road and crashes into Boswer’s castle. Everyone gets flung in a different direction and Mario has been given a new task to find the seven star fragments. Otherwise, no one will be able to have their wishes granted. This simple story will have Mario recruiting allies old and new as he attempts to see what the deal is with this giant, animated sword. Solid writing with a humorous script will keep this story fresh. It makes for a great change of pace in comparison to other RPGs that are more serious.

Since Mario is known for his jumping abilities, Mario RPG’s exploration allows him to do just that. While you travel the various towns and dungeons, you will often be required to make jumps in order to get to various areas. Depending on your point of view, the easy jumping is hardly challenging. The game is well constructed and nothing is out of view unless it’s a secret. Speaking of which, hidden treasure blocks, passage ways and other bonuses are all over the place. While a simple game upon first glance, there are lots of hidden goodies to find for those that utilize Mario’s jump to the best of their ability.

Battles are also simple. They’re turn based, but instead of button mashing, you will have to hit a second button with proper timing to increase the power of attacks and spells. Even certain items will require you to hit a button with the right timing. When the enemy attacks, you will need to time a button press properly in order to mitigate damage. Up to three characters can be in your party, but the truth is you are only allowed to select two. Mario will always be forced on your team, which is a real shame because having various party combinations would have been fun. Now, I’m not saying Mario is not a worthy addition to a party. I’m just saying that having the ability to kick him out should have been added. Despite some of the actions requiring strict timing, Mario RPG has little challenge. Regular foes, bosses, and secret bosses hardly stand a chance against Mallow’s lightning magic, Geno’s energy attacks or Bowser’s ability to crush anything he sets his eyes upon. And, with Princess Toadstool always keeping the party healthy with her healing magic, foes don’t stand a chance. However, the game never stops being fun due to all of the unique abilities. Furthermore, leveling up will allow you to increase certain statistics to your liking.

The music in Mario RPG is fantastic. One of my favorite composers, Yoko Shimomura, is responsible for the majority of the songs in the game. The rest of the songs have been created by Nobuo Uematsu or Koji Kondo. The latter is the one responsible for all the Mario themes that have been around since the 8-bit era. The music never grows old and songs will get stuck in your head after you turn off your console. Graphically, Mario RPG shines and impresses. An isometric, 3D world filled with original and returning Mario enemies, unique NPCs and creative environments await you. Thanks to a special chip installed in this SNES cartridge, Mario RPG has no slow down and allows the displaying of special effects.

Super Mario RPG: The Legend of the Seven Stars is a fantastic RPG, but it should be pointed out that it’s not perfect. I already mentioned the fact that Mario cannot be removed from the battle party. Another issue is that the game is over way too soon. Even if you do everything, the credits will be rolling within 20 hours. Finally, item space is severely limited. By the end of the game, you will be forced to constantly remove items from your inventory in order to make room for the ones you want. Minor gripes aside, this is a great game and a wonderful way to put everyone’s favorite plumber into an RPG setting.

Overall, 8/10: What it lacks in staying power, it makes up for in joy and creativity.