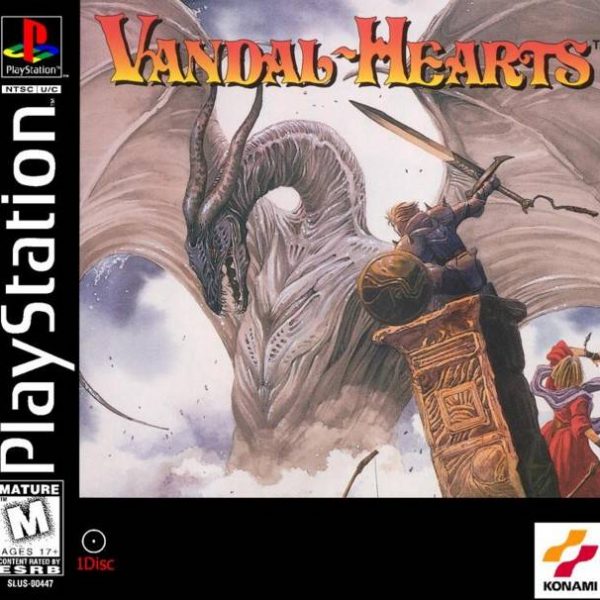 Vandal Hearts is a video game that claims to combine arcade action, the storytelling of an RPG and the meticulous planning of a strategy game. I think someone got a little carried away in that description. Since it was one of the first 32-bit RPGs, it ends up being somewhat of a mixed experience. Today, I find Vandal Hearts to be the epitome of both ambitious and charming. It has plenty of issues, but I still have no trouble popping in this little darling from time to time.

Surprisingly, Vandal Hearts has more backstory than one would think. Before we meet our hero, players learn about a messiah traveling across the continent of Sostegaria spreading his good word. After his passing, his followers began to abuse his teachings and formed the Holy Ashah Dynasty. It was thanks to a sage named Arris that the Liberation Army rose from the ashes and confronted this dastardly and diabolical dynasty. Thanks to their efforts, they became the new leaders of the continent and formed the Republic of Ishtaria. Unfortunately, leading a continent isn’t as easy as one would hope.

We then get to meet the star of this show, Ash Lambert. As a member of the Ishtarian Security Forces, Ash fights for the good of the commoner with assistance from his friends Clint and Diego. After a routine mission, Ash suspects something is amiss in this newly formed republic. It’s up to him and his party to expose the truth in this dark but campy story. The ideas behind Vandal Hearts are neat and thanks to the writing, the story’s script is able to get the point across while retaining an unintended kitschy flavor. That said, there is one major problem with it: length. You can easily finish Vandal Hearts in one weekend with frequent pauses and breaks. Run times have been known to average around 10 to 15 hours. For a strategy RPG, that is far too short. I think everyone would have enjoyed learning more about Ash’s party members.

Another one of the reasons the game is so short is because it follows a very linear narrative. You go from one battle to the next with no opportunity to return to previous areas to train. While you usually are able to stop into a town after every battle to resupply, take a break, save your progress and such, you essentially have limited gold and supplies since you aren’t able to go back for more. Luckily, Vandal Hearts is rarely challenging. Battles are played on large, isometric maps that are made up of square tiles. A basic strategy RPG through and through, Vandal Hearts plays out in the typical Player Turn/Enemy Turn fashion. When you are in control, you can move your characters and have them perform the typical actions such as attacking, casting magic, or item usage. During an attack, your character might get an extra boost in power if an ally is near the target. This is a nifty little feature that adds an extra level of strategy. As your characters level up, they will have the opportunity to change into new classes. Most classes follow a rock-paper-scissors format that’s found in other strategy games like Fire Emblem. Vandal Hearts is basic, but that doesn’t stop it from being fun. It’s important to pay attention to Ash’s health during battle because if he dies in combat, the game will end and you have to start the battle over. If an ally falls in combat, then you miss out on precious funds after the battle’s conclusion. There are no spells that allow you to revive party members, either. Luckily, Ash is powerful enough to hold his own in the multiple battles and I never worry about the possibility of a game over.

One of my favorite aspects of Vandal Hearts is the presentation. Namely, the graphics. Vandal Hearts combines 2D sprites and 3D battlefields. It’s clear that the developers at Konami didn’t understand what you could and could not do on the PlayStation, but that isn’t necessarily a bad thing. The 2D sprites look like caricatures from a trippy cartoon. This includes the heroes, the villains and the monsters. In battle, they look like they’re dancing. Outside of battle, their motions are choppy. When they level up, they jump up and down as if they’re on a pogo-stick. It sounds awful, but like I said, I find it part of the fun. The best part is when you kill a human character during one of the battles. Instead of falling on their face or simply disappearing, they erupt into a geyser of blood. It is wonderful and will never stop being entertaining. In the music department, Vandal Hearts didn’t fare as well. The same battle track is used for the majority of the game and the instrumentation used makes it sound muffled. There aren’t many memorable tunes outside of battle, either. It’s a real shame because most strategy titles have an epic soundtrack to back up the action.

As mentioned above, Vandal Hearts is short. Even if you uncover everything the game offers, chances are you’ll be done with the game in a couple of days. Still, for what it offers Vandal Hearts is a surprisingly appealing game. With so many games out there now, I’m sure that it can be easily overlooked. I say give Vandal Hearts a chance if you’re in the mood for a quick but quaint strategy title.