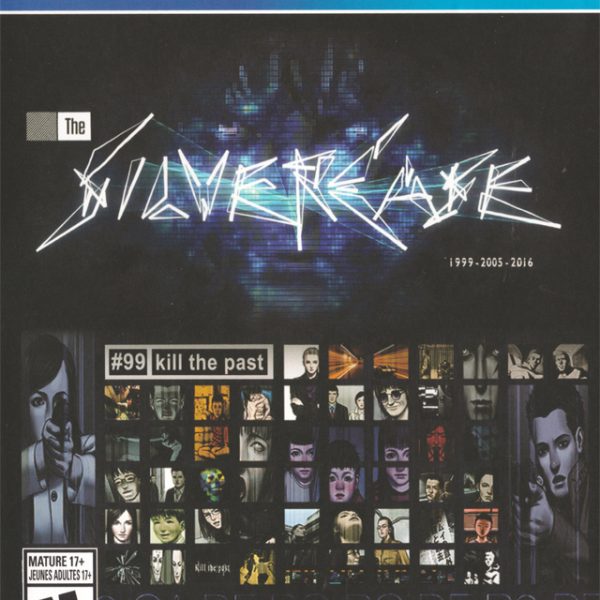 I’m not sure where to begin with my review of the The Silver Case because it’s one of the most bizarre games I have ever played. Originally released as a Japan exclusive for the original PlayStation, it’s a mishmash of film noir, visual novel, science fiction, anime, and point-and-click adventure. It gives the impression that it’s trying to be edgy with its presentation. Its stiff controls make it a chore to advance. Ultimately, it has a lack of cohesion that causes it to stumble over itself. And yet, despite all of its issues, I’m glad that I gave the game a chance. Beneath its oddities and errors, The Silver Case has an excellent story and cast of characters. Whether or not you’re willing to experience this story depends on your willingness to put up with everything that’s wrong with the game.

The Silver Case takes place in the year 1999 and focuses on the fictional Japanese setting of the 24 Wards. Years before the story begins, there was a serial killer on the loose named Kamui Uehara. Kamui’s targets caused him to receive mainstream attention. His case got dubbed the Silver Case by the 24 Wards’ Heinous Crimes Unit. Detective Tetsugoro Kusabi solved the Silver Case, which resulted in Kamui being locked in a mental institution. Now, a new streak of serial murders is plaguing the 24 Wards. Kamui is supposed to be locked away, but the pile of corpses look like Kamui’s handiwork.

The Silver Case has two scenarios. The Transmitter scenario, which acts as the game’s main scenario, puts you in control of a silent soldier that you name yourself. You and your squad managed to pinpoint “Kamui’s” location. After the members of your team get slaughtered, the Heinous Crimes Unit recruits you in an attempt to solve this new case. While your character has a key role in the story, it’s the members of the Heinous Crime Unit and the other faces you encounter that really drive it. Everyone involved in this case has more in common with Kamui Uehara than they realize. The end result is a story filled with surprises, suspense, and shock. It’s reason enough to consider playing The Silver Case.

However, playing The Silver Case comes with its share of complications. Most of the time, you’ll be reading text. Already, we have a problem. The text gets displayed one letter at a time, with each letter sounding like it’s getting typed on an ancient typewriter. In a game with copious text, you’ll either have to get used to that sound or turn the sound effects down to a minimum. In doing so, you will end up missing out on some of the other sound effects. Another issue with the text is that it’s not always clear who is speaking. Much of The Silver Case’s exposition takes place over backdrops with drawn characters. The person speaking will have their name flash very briefly. It can get confusing if you’re not focused. Finally, there are no options to speed it up. You can give a slight increase to the speed by holding the X button, but for my personal preference, I would have liked to have seen it go faster. Dialogue sequence cannot be skipped, either.

When you’re not reading text, you will be slowly moving through environments in the first-person. And again, we have a problem. Before you an actually move, you need to open a menu or a shortcut to select the move option. It’s not difficult, but it’s a questionable choice. You’ll need to open this same menu if you want to save your game, examine something, talk to someone or use an item. I feel like there could have been a more streamlined way of doing all of these. During exploration, your character will move to various markers which are indicated by triangles and/or stars. Triangles are simply destinations. When you reach a star, a cut scene may take place or you’ll have to examine your surroundings to move forward. Pressing the R1 and R2 buttons will let you look up and down, respectively. Some of the exploration involves solving puzzles, but there is an option to bypass some of these if they prove too challenging.

The important thing to keep in mind is that The Silver Case was originally released in 1999 for the PlayStation. Now that we’re on the PlayStation 4, I question why there weren’t some modern implementations to the experience. Things like text speed, scene skipping, clearer menus, and more would have really gone a long way in The Silver Case. Of course, there are times when The Silver Case is fun. Chatting with the other members of the Heinous Crimes Unit or examining your surroundings can be fun as you get closer to the truth. None of the tasks you need to do are very challenging, and there is no fear of getting a game over. The problem is that playing The Silver Case can be a drag.

The presentation in The Silver Case is a literal and figurative mixed bag. There are animated cut scenes, live action scenes, photographs, newspaper articles and a vast amount of backgrounds. The character portraits have a creepy look about them that really adds to the game’s atmosphere. During one of the missions, you will examine a website that captures the essence of the Internet during 1999. The only time the graphics fail to deliver is in certain areas that appear too similar to one another. There is no voice acting in the game, and I already mentioned the sound effects. One thing that deserves high praise is the music. The Silver Case has a fantastic score composed by Masafumi Takada. Each song adds to the experience and intensity of each location. Sometimes, there won’t be any music playing at all. Situations like this add to the game’s tenseness. Next to the story, the music is the game’s best feature.

Finishing the Transmitter arc will take about five to six hours. As you make your way through the Transmitter story, you will unlock pieces of the second scenario: Placebo. The Placebo scenario takes place during the Transmitter scenario. You take control of a reporter that is down on his luck as he attempts to cover the Kamui case. Unlike the Transmitter scenario, the Placebo scenario lacks intrigue and suspense. In fact, the majority of the time will spent on said reporter’s computer checking emails and corresponding with his acquaintances in chat rooms. I feel that the Placebo scenario was unnecessary. Luckily, it can be finished in less time than Transmitter. In order to get all of the game’s trophies, you will need to complete both scenarios. In total, completely finishing The Silver Case can last up to fifteen hours. Even with all of it’s issues and lack of modern touches, I’m glad I took a chance with The Silver Case. There are times I think that the story of Kamui Uehara could be better told via a book or a movie, but its that same story that makes the game worth a glance.

Overall, 5/10: Check out The Silver Case for the plot and setting, but be mindful of its antiquity.