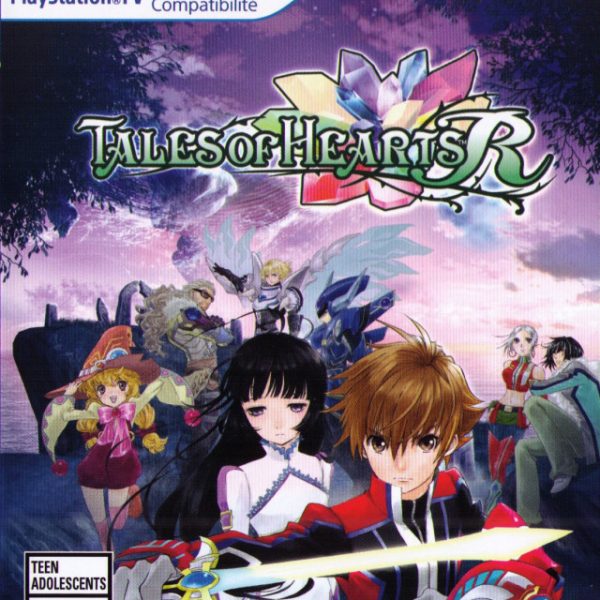 Do you know what it feels like to be let down by first world problems? I know I do. If I was promised a ski trip, I was let down to learn that there wasn’t enough accumulation. When I was told my braces would finally get removed on a certain day, I was let down to learn my teeth needed more straightening. And when I was told that there was a new Tales title being created, I was let down upon learning it would never be released outside of Japan. A true Tales fan knows the struggles of being let down. So when Tales of Hearts R was announced for the United States in a video by creator Hideo Baba himself, you can imagine my surprise when I learned people were upset. While I was shouting from the rooftops with joy, a vocal minority began to gripe about the fact that the game would be released without English voice acting. If you’re one of them reading this review, then shame on you. Clearly, you aren’t a true Tales fan. People like you can’t even be called fairweather fans. If you are part of this minority that would boycott or belittle Tales of Hearts R, then you don’t know our (first world) struggles. Indeed, the roaches like you are what causes us to miss out on fantastic games from Japan because the characters speaking the dialogue are speaking something other than English.

Tales of Hearts R is a Vita remake of Tales of Hearts originally on the DS. The “R” in the title refers to a re-imagining and is a fully equipped overhaul from the original. Thus, people will immediately notice that the first difference from the DS to the Vita is the look. Hearts R is a gorgeous game on a system that utilizes graphical abilities properly. With stunning 3D characters and environments, a good amount of animated movies and impressive effects, everyone will agree that Hearts R is great to look at. I will cover the voice acting later, but I want to mention that this game has some of the best music in the series. Tales games usually lack in the music department, but Hearts R exceeds expectations.

In fact, many things about Hearts R surprise me. The story is one that alters from humorous to tragic and back again. It does it in an effective way thanks to a solid translation. Hearts R takes place in a world where monsters known as Xerom consume people’s Spiria. Spiria refers to crystalline structures that represent people’s emotions. To combat the Xerom, people developed weapons called Soma. Kor Meteor has just received his Soma from his grandfather. After a day of training, Kor meets Kohaku and Hisui Hearts, siblings on the lam from a witch named Incarose. This chance encounter will lead Kor and a bunch of friends on a journey to stop the Xerom and fulfill an ancient prophecy. Like I said, the story is great. While Tales titles are more focused on character development and interaction than central plots, Hearts R has both. Kor, Kohaku, and the rest of the crew are a creative, colorful and memorable bunch.

However, I feel the need to point out certain things in the story that have been a point of complaint by the above mentioned vocal minority. In Japan, Kor is known as Shing. While there is meaning behind the name change, the fact that the game is entirely voiced in Japanese might sound a bit off at first. Trust me, it’s not bad. In fact, you will likely forget about it after a couple of hours of game time. Another thing to point out is that the script translation doesn’t always match the voiced dialogue. Since I know some Japanese, hearing the inconsistencies does, once again, sound somewhat off. Just like the name change, you will get used to it. This is a great story and boycotting it because of the language would be a mistake.

But, your biggest loss in ignoring Hearts R would be not being able to participate in the battles. Before that, I should mention that Hearts R plays like a traditional RPG with towns, a world map, treasures, shops and people to chat with. There are lots of things to do in Hearts R when you’re not saving the world from Xerom. Cooking, a Tales staple, is just as helpful as ever and you can find new recipes from the Wonder Chef and from shops.

Once you enter a dungeon or the world map, there is a chance that a battle might happen. One flaw is that battles are random. This is a real shame, because they had choice encounters since Symphonia. Hearts R should have been given this same benefit. Battles play out in typical Tales fashion. You can use basic attacks, Artes and spells to create high numbered combos that juggle foes. Similar to the remake of Tales of Destiny, Hearts R lets you fight (and remain) in the air with the right combination of Artes. The amount of possibilities thanks to a huge variety of Artes are endless. The fun doesn’t stop there, though. Hearts R has features that separate it from other entries in the series. You can perform counterattacks when enemies flash red with proper button timing. Also, you can knock foes into the air and warp to them to create high powered combos that open up more possibilities such as finishing moves and team attacks. And of course, you have access to powerful Mystic Artes that have all of the style the series is known for. Combat never gets old and with multiple difficulties, there is something for everyone to enjoy.

One thing worth mentioning is that there is also someone for everyone to enjoy. By this I mean all of the characters who join Kor are fun to use. Some are more accessible than others, but if you ever get tired of playing with one character, you can find a new character to use to keep the combat fresh. Switch to Kunzite and combo enemies into aerial oblivion. Switch to Ines to drown foes in watery ax attacks that pack a punch. Characters earn points upon a successful level up that get distributed to learn new Artes, skills and stat boosts. I have nothing bad to say about combat, other than entering it is random.

Finishing Tales of Hearts R will take about 40 hours. Bonus content, the GRADE shop and a variety of trophies will make the time last about 60 hours. As a true fan of the Tales series, I used to have a tendency to go back and forth between which of the games held my number one spot. Having played Tales of Hearts R, I can now say that I have found a permanent favorite. In fact, the only bad thing I have to say about Tales of Hearts R is that it got tainted by the venom of the whiners around the web. Instead of being thankful, they pitched a fit. Unacceptable, my dear readers.

Overall, 9/10: I highly recommend this game for all Vita owners and, no matter what you do, stay away from people that complain about the lack of dubbing.