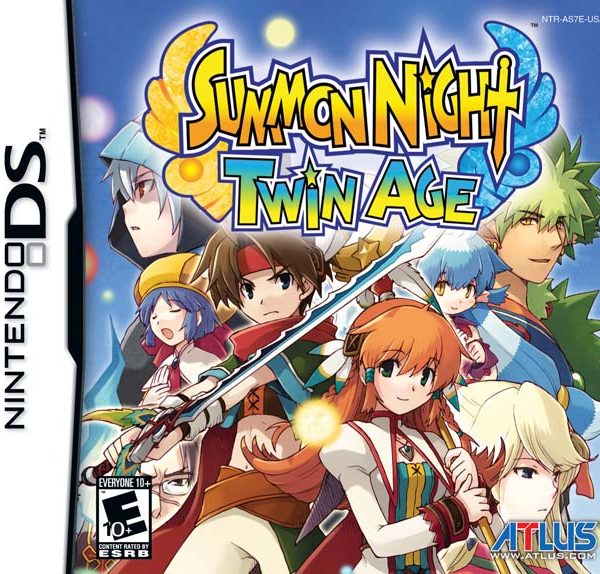 Author’s Note: This review was originally published on January 3rd, 2011. Like other reviews of the time, I used “witty” taglines to separate each section.

The Summon Night series has a very small reputation here in America. While the games have typical RPG features, they also feature addictive crafting systems and adorable characters. Summon Night: Twin Age is no exception to this rule. In an attempt to stand out from it’s GBA predecessors, this game did away with it’s usual interface for a touch-screen only adventure. By today standards, it’s nothing innovative. In fact, it suffers from the same symptoms most DS games have: thinking that touch-screen game play is something new whereas it’s nothing more than a gimmick. Those looking for the next big RPG will be let down. Summon Night: Twin Age is a fun game, but it doesn’t bring anything new to the table.

Some Bad Spirits.
Summon Night: Twin Age takes place in the world of Clardona. The humans of Clardona use the spirits to fuel their energy and magic, whereas the beastmen called Kascuza coexist in harmony with the spirits. Thus, the humans and Kascuza are usually at odds with one another. The exception to this rule is on the island of Marbado. Humans and Kascuza get along with each other, and the spirits. A human girl, Reiha, lives with her summon beast Aldo. Throughout the years, they have lived as brother and sister and developed a close bond. When Aldo senses the spirits are acting up, the pair decided to investigate the island and see what they can do.

A whimsical tale if there ever was one, Summon Night: Twin Age does away with serious issues and lets players enjoy a lighthearted quest. At the start of the journey, you pick either Reiha or Aldo as your main character. Reiha is gifted with range attacks and magic, whereas Aldo uses a variety of bladed weapons to get up close and personal. While certain events may have subtle differences depending on who you pick, the overall tale remains the same. Reiha and Aldo meet some wonderful characters throughout the journey, which brings me to one of the game’s best features: the characters. They develop exceptionally well over the course of the game and their personalities shine thanks to their differences. Ayn will always be soft-spoken, but by the end of the game, she will always stand for what is right. Lila remains a conceited woman from start to finish, but her compassion grows for the friends she makes. The characters in the game greatly add to the enjoyment. It’s too bad the story that holds these characters is in need of work. The biggest problem with the story is that it takes too long to pick up pace. In the last few chapters of this 20 hour game, you finally unravel what’s going on and what needs to be done to solve the issue. This big plot twist is hardly anything exciting, either. Luckily, the character interaction makes up for the story’s shortcoming. Fans of the series will be glad to learn that the night time chats are back.

Point and Cli-err…Tap.
The majority of Summon Night: Twin Age is controlled by the stylus. With the exception of pausing the game or holding a special ability, you’ll have your stylus in one hand and your DS in the other. Similar to Magical Starsign, holding the stylus on a certain location will make your character move in that direction. By drawing a line, they’ll move in that direction even without the stylus on the screen. Tapping an NPC will allow you to talk with him or her. Shopping is done with the stylus, menu selection is done with the stylus, and switching the character you control is done with the stylus. Battling is done with the stylus, too. Simply tap an enemy, and your character will attack it until it perishes or you have him or her move/do something else. To use a skill or spell, you can select the desired one from your preset command pallet with the stylus, and then tap the enemy. Other attacks will have you draw lines or hold down the stylus in a general direction. To heal, select an item or spell, and tap the person in need of healing. While all of this is going on, the AI will take control of the other two party members. Usually, they do a decent job of helping you out. Other times, they just love to stand on spike floors or let the enemy party lay on the hurt. Aldo and Reiha must always be present, and the third character you can pick yourself. It’s nothing intuitive, but it gets the job done. The screen can get cluttered with too much at times, making healing an issue. However, seeing a group of enemies perish thanks to a powerful spell from Reiha or a devastating sword attack from Aldo never grows old. Once you level up, you recover all of your energy and magic points.

A Touch of Customization.
As mentioned, the stylus is used in the menu. In this menu, you’ll find the options to change the settings, set your command pallets, switch party members, and other things to get you ready for your adventure. In the shops, you can buy and sell equipment, as well as upgrade and create new equipment. The skill tree is the most fun of the options in the menu screen. This allows Reiha and Aldo to learn and enhance new skills with SP, which are earned from level ups and finishing certain events. The more you upgrade a skill, the more powerful it gets. It also decreases the charge time for it. Aside from this, the only other notable feature is the monster creation system. With flasks, you can create monsters with the help of another person. The higher the person’s support, the more monsters you will create. These make great diversions in battle.Finally, items, monsters, and weapons can be traded with friends via the DS wi-fi network.

Pixel Perfect.
While the characters are the best feature of the game, the presentation is a close second. Staying true to it’s predecessors, 2D sprites and colorful backgrounds dominate your DS screen. They look adorable as ever, and they also move with an impressive amount of fluidity and motion. The attention to detail was done surprisingly well. Character portraits take up the screen when a conversation is going on; a feature I’ve always liked in my RPGs. The music is nothing to get excited about, and the voice acting is minimal. A quip here, a happy giggle there-it works for the game.

Lackadaisical Lightheartedness
Summon Night: Twin Age spans 20 chapters. Finishing one quest will last about 15 hours. To see how Aldo’s and Reiha’s quest differ, you can pick the other character in your next file. As for me, once through is plenty. The game did a bunch of things right. The characters and their interaction, the lovely visual design, the weapon crafting, and the plethora of skills to learn in the skill tree are familiar features that work, and for the Summon Night franchise, work well. The below average story and unintuitive touch-and-act game play aren’t anything ground breaking, but they get the job done. It’s not that Summon Night: Twin Age is bad. The problem is that, with so many heavyweight RPGs out there, Summon Night: Twin Age falls flat. RPG fans, especially those who enjoyed the GBA titles, should get some enjoyment from this title. Everyone else is better off looking elsewhere. Summon Night: Twin Age has a fair amount of content to offer, but it’s not enough in comparison to what the DS has already.