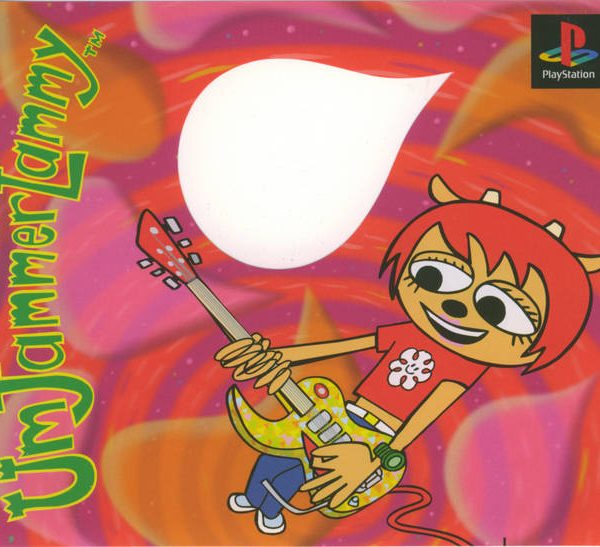 Um Jammer Lammy is a follow up to PaRappa the Rapper. Before going into it, I had some idea of what to expect: mandatory precise timing, a colorful setting, and some tunes that will stay with me always. In a weird way, I got all and none of those things at the same time. Was my timing just that awful, or was it as random as it looked? Was this world colorful, or was it too over-the-top even for artist Rodney Greenblat? Are the tunes staying with me because they’re good or because they’re nagging? The answers to these questions ultimately gave rise to issues, which in turn make the game hard to recommend. I say that as a fan of both PaRappa the Rapper and PaRappa the Rapper 2.

Lammy is an adorably shy member of the all-girl rock group: MilkCan. Normally meek and awkward, Lammy’s behavior will shift to a confident musician when she holds a guitar. The night before a concert, she has a dream where she acquires sage advice from Chop Chop Master Onion. His advice is, “Dojo, casino, it’s all in the mind.” In other words, if she can picture a guitar in her mind, then she can do anything. When she wakes up, she sees that she only has 15 minutes to get from her house to her gig. Lammy will need to get to the venue on time, but it looks like her crazy surroundings have other ideas in store for her. Personally, I prefer the “I gotta believe!” feel good adventure of PaRappa. Lammy’s campaign starts fun but her “Leave it to Lammy!” slogan doesn’t have the same impact. 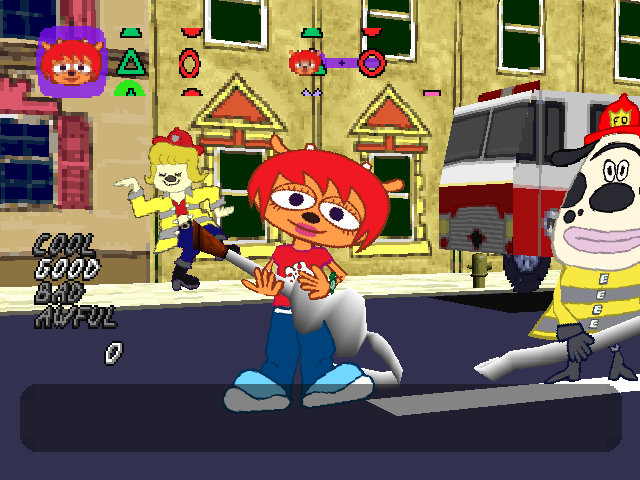 The second level. I was actually able to get this one on my first try.

Lammy will come across various obstacles blocking her way to the concert.  Lammy has to clear these obstacles (i.e. levels)with the same gameplay featured in PaRappa the Rapper. In each level, Lammy will be playing a “guitar in the mind” alongside the level’s teacher. The teacher will sing the lyrics indicated by their face icon scrolling across the top of the screen over the PlayStation controller’s button icons. Lammy (you, the player) needs to match these buttons so she can match the lyrics on her guitar. Matching the buttons exactly is a safe way to go through each level, but if you make an attempt at freestyling then you could obtain a ranking of Cool. Cool rankings allow you to completely free style the stage. On the other hand, if you mess up, then your rankings will go to Bad and Awful. In order to complete a stage, Lammy’s ranking needs to be at either Good or Cool by the time the song ends. Otherwise, you have to play through the level again.

Essentially, if you’ve played PaRappa the Rapper, then you know how to play Um Jammer Lammy. However, there is a key difference with Lammy’s game: consistency. As soon as you start the game and begin the first level, it’s clear that something is amiss. You can have the most impeccable timing, but the game will troll you and move your rank from Good to Bad to Awful and to the retry screen. So, you’ll try again and likely time your buttons the same way. This time, the game will let you continue. Every stage has the variable difficulty that takes away any semblance of fun and improvement. At one point, I remember just button mashing and going from Good to Cool. And yet, doing the same thing a few stanzas later caused me to go straight to Awful.

This lack of fun is further emphasized by the fact that a couple of the songs are worth listening to. Seriously, I had the television muted on the third level. I know, I know. Music is subjective and blah-blah-blah, but I cannot see anyone finding something redeeming in most of these songs. The graphics feature the familiar style and level of kookiness, but even these have their issues. Again, the word “consistency” will pop into your head. There’s so much going on at all times (both in and out of gameplay) that it gets to be overbearing. Still, I appreciate the art style and wish more games would feature Greenblat’s work. This part of the game is the weirdest, most disturbing, and the most frustrating.

If you manage to finish the first stage, then you will unlock Co-op and Versus modes. Finishing the entire game unlocks a bonus mode where you can play as PaRappa. Finally, clearing PaRappa’s campaign unlocks some additional features. The question is whether or not you’ll have the patience to do all this. I’ve come close to finishing Um Jammer Lammy. The last level is a long tune where the game’s randomness gets amplified to eleven. Eventually, my patience ran out. The question is whether or not yours will do the same. Even if you enjoyed PaRappa the Rapper, take caution when approaching Um Jammer Lammy. For a game to be fun, you actually have to be able to play it. It seems that the developers missed that memo.

Overall, 3/10: Don’t leave it to Lammy. What could have been a charming follow up ends up becoming a discombobulating mess.