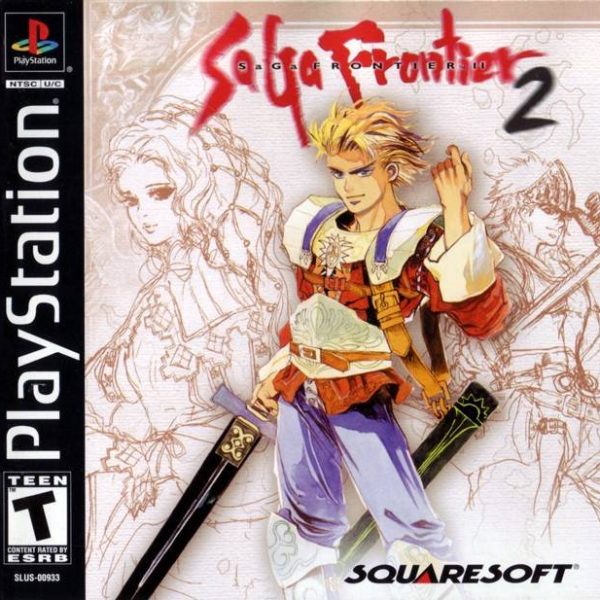 Author’s Note: This review was originally published on July 27th, 2003. SaGa Frontier 2 is an interesting game because it rewards a very specific type of play style. When I first played it, I wasn’t aware of this play style and had to use a Game Shark to survive the brutal final boss. Some day, I’d like to revisit it and see if I can finish the game without the aid of codes.

SaGa Frontier 2 is the next addition to the very fun SaGa series. While not as great as the first SaGa Frontier, it still is both unique and entertaining.

Story: 9/10
There are actually two stories, and you play both scenarios: Gustave and Wil Knights. Gustave is a boy who was born without the ability to use magic. He was banished from his kingdom along with his mother. He sets off to get revenge using steel powered weapons (something unheard of) as he matures. Wil Knights is a boy who loves adventure. After the death of his parents, he decides to leave and search for the cause of their deaths. Little does he know that a mighty relic will put his family in danger.

Both stories are unique, with a couple of twists in there. You can also make choices that effect the game in the future. My qualm with the entire story is that Wil’s has more fighting, less dialogue and Gustave’s is the opposite. If they were more balanced, then it’d be better.

Gameplay: 10/10
SF2 uses something called the Multiple Scenario System. You choose a scenario, play it, and when you’ve finished, you move on to the next one. It’s really innovative, and allows you to play the game as you wish. Unlike the first SF, however, you don’t have the free-roaming ability to EVERYTHING you want. And you can’t go back to old scenarios. Still, I really enjoyed it.

The towns are still the same as any RPG. You can buy things, rest, talk to people…same old stuff. Money is a huge problem in the game, especially when buying the powerful gear. Much of the time, however, you’ll have find weapons in the dungeons…which leads me to the next part.

Battles: 6/10
There are three types of battles: Party, Duel, and Strategic. Party battles are your basic battles. Up to four members face off against monsters. You can attack, use magic, defend, or recover all of your HP (by sacrificing one LP). Weapons do break in this game, but there are so many of them you won’t mind. You learn new skills by using one skill over and over (the lightbulb is back) and eventually you get something new. Magic is used by equipping Quells. Say your person has learned Delta Petra (a stone and water art). You’re going to have to equip stone and water gear. What’s really cool is that you can use the environment to help you cast spells. For instance, if you’re in the desert you can use stone as much as you want. Strategic battles are those in which you walk around a grid, encounter an enemy, and engage in a party battle.
Duel battles are one on one fights. You can choose from sword, axe, etc. maneuvers to create combos. If you put everything together right, then you’ll learn a new move (if your skill is high enough, of course).

The VERY bad thing about the battles is that after a certain point in the game, they get insanely difficult. Not only that, but the bosses can get even tougher. What’s worse is that there is only one, very rare, recovery item in the entire game. While you do recover some HP after battle, it still may not be enough.

Characters: 8/10
There are a vast amount of interesting characters. Both stories have unique faces that affect the story. Each character has his or her own special attribute. Cordelia is excellent with spears, and Raymond is an excellent archer. What I don’t like is that some of the characters just seem to vanish after a certain point. What has happened to this person? Another thing is that many of the characters are useless, making battles that much more difficult.

Graphics: 9/10
The hand painted water color backgrounds are superb. You’ll just stop to stare at them for a while because they’re so well done. The character sprites also look pretty cool. Unfortunately, they lack a lot of fluid motion and movement. Still, SF2 has great graphics.

Music and Sound: 7/10
The music really gets repetitive at times. There aren’t that many tracks to speak of. The battle tracks are just a bunch of re-mixes; really annoying.

There are no voices in this game, so we don’t have to worry about dubbing or bad voice overs. The slashes and punches sound nice, but lack variety.

Replay Value: 5/10
After you finish both scenarios, you’ll probably be done with this game for a good long time. There is a nice bonus at the end of the game, but nothing too great.

Difficulty: Hard
This is one tough cookie of an RPG. Just remember to fight as much as possible so you can get that HP up.

Buy or Rent: Rent
Give this a rental first because some may not enjoy it. I bought it first, but that was because I’ve already played some of it at a friend’s house and enjoyed it.

SaGa Frontier 2 really is an interesting game. It does have some major flaws, but still has that Square RPG feeling that we all know and love.