Experience fiends, ronin, and human anatomy in Blood Will Tell. 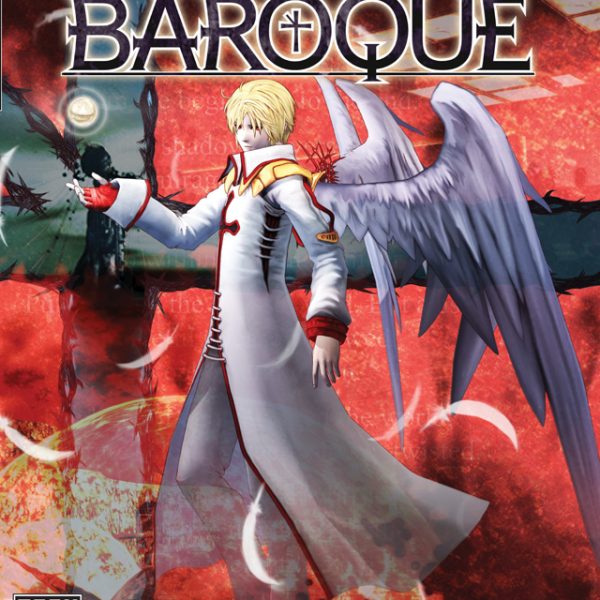 Author’s Note: This review was originally published on May 1st, 2008. Like other reviews around the time, this one features “witty” taglines that separate each section. Baroque is a very obscure game with an audience you can count on one hand. I’m glad I gave it a chance because it won me an award.

The more I read and heard about Baroque, the more worried I got that I was not going to enjoy it. I figured that a rogue-like dungeon crawler with insane difficulty and crazy story telling would not be my style of RPG. Luckily, I was proven wrong. While Baroque is not for everyone, I have found plenty of enjoyment from it. It is hard for me to recommend, but there will be a few people out there who will enjoy it as much as I do, especially if you like your RPGs with grit, challenge, and randomness.

A Distorted World.
A disaster known as the Blaze has turned the entire world into a wasteland. Not only is the world decimated, but reality distorts day by day. After the Blaze, the structure known as the Neuro Tower became infested with monsters known as Meta-Beings. A boy known only as The Protagonist awakens to see this distorted world, and an Archangel with red eyes tells him, “Your sin shall be forgiven when you heal the world. Now, go to the Neuro Tower.” It is up to The Protagonist to heal the world, and apparently, to heal sins unknown to him.

Obviously, this story is a dark. From the start of the game, you will have no idea what is going on. In fact, you are thrown into the Neuro Tower moments after the opening sequence. Your goal is the same: head to the bottom of the tower to heal your sins. However, every time you die in the tower, you will gain more information about yourself, about the world, and about the other people living in the word. For once, dying can prove beneficial to you. As you wander around the area outside the tower, you will see some of the survivors of the Blaze. These people cling to fantasies known as Baroques and have turned into bizarre creatures as a result. They all seem to say something that may not make sense at first, but with enough story progression, you will be able to piece together their words. In the end, you are left with a twisted, interesting, and complex story that is exciting to uncover. It can be difficult to unlock more of the story, but experimentation and patience will allow you to fully reveal what happens.

Going Down The Tower.
One odd thing about the Neuro Tower is that you travel down it, not up. Despite this fact, game play is very basic in Baroque. You move your character down the tower, floor by floor. Each floor will never be the same twice; the dungeon is randomly generated. When you reach a blue square, you have found that floor’s exit. You can then enter the port, save your game, and move onto the next floor.

As you travel through each floor, you will notice many things going on. A map will get drawn for you as you further explore your surroundings. Traps might activate with the push of a button or due to you being near them. With your protagonist, you will see that you have HP, as well as VT. VT represents your vitality, which allows your HP to recover slowly over time. However, your VT is always draining. If you let it reach zero, your HP will start to drain as a result. This is where items come into play. There are hundreds of items in Baroque, and each floor is usually littered with them. Hearts restore your VT, flesh restores your HP, and bones restore both. Bones can also have a positive or negative side-effect. Besides restorative items, you will find fluids that increase or decrease your stats, parasites that add attributes to you, brands that add an effect to you, and boxes that have a surprise inside for you. Of course, not all of these above mentioned items will help you. A box may explode causing huge damage, rotten food can give you a stomachache which makes you physically weaker, a brand cannot be removed unless you find the right item, and parasites cannot leave you until you find a new one. Careful item management is critical.

You will also find swords, coats, and wings that your hero can equip in his fight against the Meta-Beings. Unfortunately, your character is not much of a fighter. While you will obtain a five-round gun from the Archangel at the start of your voyage, you will need to rely on your swords for your fighting. With the variety of swords, your character can perform a weak combo attack, a strong attack, and a charge attack. He can also throw unwanted items at an enemy for some damage. There is no guard button, no dodge button, and no jump button. Luckily, your hero can lock onto his enemy when he wants to throw an item. Throwing things is a surprisingly nifty feature because not only does it clear out your limited inventory, it allows you to deal significant damage to your foe.

Your foes will need to be damaged, too. Baroque’s enemies are difficult. They all have various ways of ending your life, and diving into the action is a sure-fire way to die. Yes, dying does accomplish things in the game, but reaching the bottom of the tower is also vital. While your hero will level up, managing your items and equipping the right swords will be what gets you to the bottom.

The majority of Baroque is spent inside the Neuro Tower and has you dealing with the lackluster action. Fortunately for you, Baroque has an excellent camera that will never hinder your progress, and the endless amount of items gives you plenty of ways to customize your character. The action might be dry, and the enemies might hit hard, but Baroque’s formula for action is perfect for rogue-like fans and players looking for a challenge.

Square One, Ground Zero.
When your character ends up perishing, or you happen to reach the bottom floor, you will return outside to your decimated surroundings. You will also return to level one, and have no items in your procession. However, do not let this scare you. First, part of the story explains why you begin at level one. Second, you can transfer your favorite items through Consciousness Orbs located in the tower and have the Item Collector hold onto them for you. When you speak with the Item Collector, he will give you back your stuff.

You will also see that things slowly change outside the tower as you return from death or the bottom. All characters have something new to say, and other characters might give you an item. Interacting with the characters each time you return from the tower adds to the replay value. The fact that you start at level one and empty handed might turn off some people, but this game is meant to be difficult.

Dated, Not Hated.
Baroque’s fully 3D atmosphere is interesting. The monsters you encounter are truly unique; far more gruesome than I have ever seen in other RPGs. In fact, survival/horror games could learn a thing or two from gazing at the monsters in Baroque. The characters also have a unique art style. During the event movies, you can see these characters with more detail and texture. Your environment is constantly changing, and there is usually plenty to see. The tower may generate a few types of rooms, but their floor plan is never the same twice. Unfortunately, the remade version lacks the graphical ability of PS2 games today. While remade for the Wii and the PS2 from the Sega Saturn, the graphics are still a bit grainy and unpolished. This may add to the idea of living in a distorted world, but better clarity would have been welcome. Personally, I find the graphics to be fine. Besides, any game in which the equipped items make your hero’s entire look change gets a thumbs up in my book. The graphics may lack that next-generation flare, but they work.

Screaming Soundly.
Baroque is a fully-voiced game with some excellent actors and actresses. Your hero has little to say, but the surrounding characters reveal interesting bits of information with believable acting. One of the greatest things about the sounds is that monsters sound creepy as hell. When they die, they each let out a unique, gut-wrenching yelp. Some eerily laugh, some howl like rabid beasts, and others scuttle across the floor like centipedes. The sounds the monsters make truly add to the atmosphere of Baroque and the Neuro Tower.

As you travel throughout the tower, you will also listen to a great soundtrack. The outer world consists only of the howling wind, but the tower makes up for it. The dark, enigmatic themes of the tower never get old. When the music plays during the movie sequences, the song playing fits the situation you find yourself in perfectly.

Many Ways To Die.
Baroque’s method of game play features multiple endings and paths to take. A casual player may end up stuck getting the same ending time and time again before they figure out what to do to advance the story. Despite this fact, Baroque is full of the replay value that comes with any Sting developed video game. Besides having various endings, you can fill up your item list, fill up the voice collection, and complete other lists as you get further into the game. When you finally see the end credits, you can begin an entirely new quest with your saved data and go back for more to get the things you missed.

Dark, Difficult, Demanding, Damn Good.
Clearly, Baroque is not for everyone. It has a very dark atmosphere that takes an interesting approach to story advancement. The enemies in the randomly generated dungeon hit hard and make your quest difficult. Unlocking everything and revealing the truth of the story will take time and patience if you decide to not use a walkthrough. However, for those people looking for a challenge, Baroque is an excellent choice. A dungeon crawler through and through, Baroque is a game made for the hard-core RPG player.