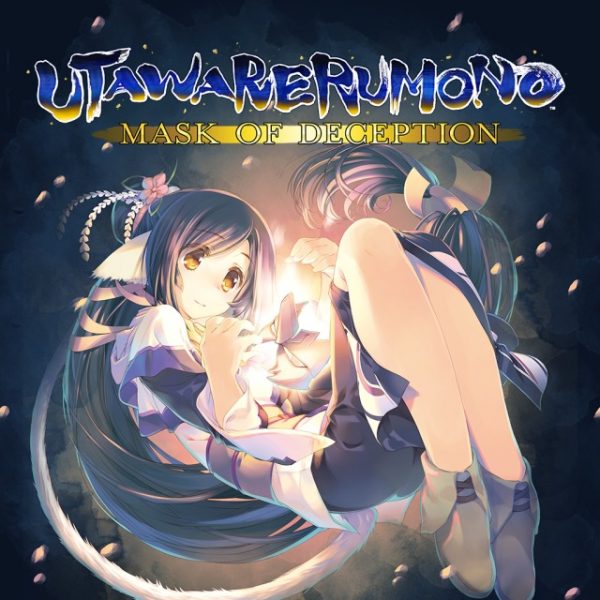 Utawarerumono: Mask of Deception begins as many games do. A man wearing nothing more than a hospital gown is wandering a snowy field with no memories of his past or of how he got there in the first place. After stumbling into a cave, he encounters a slimy monstrosity that threatens to literally devour him. Luckily, he is saved by a woman with animal ears and a tail named Kuon. Kuon decides to take care of this amnesiac for the time being and gives him the name “Haku.” Haku is full of questions, but for now, he will stick with Kuon. Together, they take a few steps towards a grand adventure that will lead them to the imperial capital of Yamato. Haku is about to meet a multitude of individuals during his stay in the capitol. Hopefully, his memories return during said stay.

The story Utawarerumono: Mask of Deception is the game’s best feature, and at the same time, it’s the one with the most issues. For most of the game, Haku and his friends will be traipsing around Yamato and the surrounding areas; yammering on about everything that isn’t important. I understand that visual novels are text heavy and require plenty of characterization, but there will be times that it gets to be too much. As fun as it is to learn about the culture of Yamato, the characters, and the deception going on behind the scenes, Haku’s past ends up becoming an after thought. For the first two thirds of the game, there will be subtle glimpses of Haku’s past. Just when something is about to be revealed, the game goes back to Atuy talking about her favorite ways to kill fish, or Nekone trying to act like an adult while kicking Haku in the shins, or Kiwru stammering is words. Don’t get me wrong; learning about the characters and watching all of the care put into Atlus’ localization of this game is great. The issue is that there are moments you just want the game to stop teasing you and get to the point. When you finally learn about Haku’s origins and uncover more about the secrets of Yamato, the wait will feel worth it.

When you aren’t battling in Mask of Deception, game play takes a hands off approach. Most of the time you’ll be reading text, but you can pause the game at any time to open a menu. Here, you can check out the glossary to learn more about the world of Utawarerumono. You can also save your game, adjust the settings, or begin a Free Battle. Saving at any time is a nice feature because there will be long stretches before the game takes you to a story-related battle. There are seventeen battles that Haku and his companions will participate in. Prior to entering the battlefield, you can equip your characters with various tomes to grant them passive abilities. You can also distribute Bonus Points to increase their base stats. After selecting which units you wish to have participate in the battle, it will finally begin.

Utawarerumono: Mask of Deception’s battles take place on a grid that will feel familiar to anyone that has played a strategy RPG. The turn order of the participants is displayed on the left of the screen. When one of your characters gets a turn, you can move your character and select one of their actions. Instead of a standard attack, your characters use skills called Action Chains. These can be used to attack an enemy or heal an ally. As characters gain experience points and level up, their Action Chains will increase in power and they’ll learn additional parts of the chain. Similar to games like The Legend of Dragoon or Super Mario RPG, Utawarerumono: Mask of Deception’s battles require player input to gain in a boost in effectiveness. There are two types of maneuvers that require your timing. The first is when a large circle decreases in size to cover a smaller one. When the two sizes match, pressing the X button will boost the Action Chain. The other type involves holding the X button as a white line fills a ring. When it reaches the top of the ring, pressing the X button will boost the chain. Both types require a bit of practice, but end up becoming second nature after a few tries. Characters will slowly gain Zeal as they perform actions. When their Zeal reaches 100, they will be able to act multiple times and/or unleash an impressive and deadly Final Strike.

Each character learns unique Action Chains, as well unique passive abilities that effect them and those around them. I always have a difficult time figuring out who to use in my party because I enjoy each character. Another great aspect about the battles is that you can retry them at any time if things aren’t going well. You can also rewind turns if you want to try a different approach for victory. At the end of the battle, characters that participated gain extra experience points and additional BP for distribution. Battles, while scarce and simple, are perfect devices for moving the story forward.

In terms of presentation, Utawarerumono: Mask of Deception is a masterpiece. The entire game is voiced in Japanese and features a wonderful collection of music that fits well with the oriental setting. The highly detailed backgrounds used during the story events serve as a strong foundation for the gorgeous character art. In battle, characters are represented by chibi-styled 3D models. They look basic, but watching them swiftly move in battle as they execute their Action Chains makes up for it. The game feels right at home on the Vita.

By the time the game ends, you can be looking at anywhere between 25 to 40 hours. There are some challenging trophies to attempt to earn, as well some bonus material that can only be activated after the credits finish rolling. They’re a nice touch, but the true reward is knowing that this is only the beginning. The final events will leave you wanting more from the Utawarerumono world. Many questions will be left unanswered by the time it’s over. We will have to wait until Utawarerumono: Mask of Truth arrives to see what happens to Haku and his friends. For now, I recommend Utawarerumono: Mask of Deception to anyone that enjoys a great story. It takes a while for it to get going, but patient gamers will be treated to something epic.

Overall, 7.5/10: Utawarerumono: Mask of Deception is a story worth seeing from start to finish despite the start overstaying its welcome.