A fun game, a fun adventure, and a fun Final Fantasy! But, was it worth the wait? Final Fantasy XIII ends up being an interesting experience. 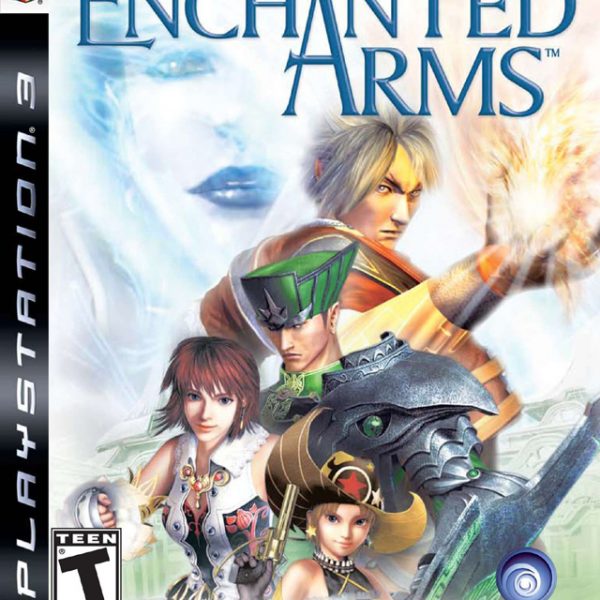 In the year 2006, the last thing on my mind was owning an Xbox 360. However, I came really close to picking one up after seeing the announcement of a new RPG. That RPG was, of course, Enchanted Arms. After watching footage of it and getting more hyped, something told me to hold off on picking up this From Software title. Many years later, I had the chance to experience a game I’ve had my eye on for a long time. The best part is that I got to do it on the PlayStation 3. Enchanted Arms is yet another reminder of why I enjoy playing RPGs so much. The game slips up a few times, but this is an experience I recommend to any fan of the genre.

Enchanted Arms begins in Enchanter University in Yokohama City. Our hero, Atsuma, is fast asleep in class. His two friends, the fantastically flamboyant Makoto and the perfectly pedagogical Toya, watch as he slumbers through another lecture. Eventually, the three leave class to experience a festival taking place in Yokohama City. As things start to get into full-swing, snow starts falling on the city. Not only does the temperature drop, but the snow starts to drain the life force of everyone except the three students. Atsuma’s curiosity gets the better of him and he intends to find out what’s going on. The Enchanter University holds more secrets than Atsuma could ever imagine.

Atsuma and his friends are in for a wild yet classic ride. Familiar themes will come together in a tale that might seem familiar to those that have played their share of RPGs. That said, the endearing characters and the great lore help differentiate Enchanted Arms from the rest of the pack. It’s worth noting that Ubisoft delivered a script that relies heavily on comedy. While the story can experience tragedy, love and drama, most of the game relies on humor to move things forward. I welcome this in RPGs as long as it doesn’t detract from the overall goal, and Enchanted Arms does a good job with it.

Enchanted Arms is a linear RPG. You will be going from point A to point B in order to move things along. Towns are full of NPCs to chat with. Most of the time they offer fun conversations that show Atsuma’s fun personality. There aren’t any shops in this game. Instead, you do your shopping at purple crystals located in towns and dungeons. You can buy a variety of items, skills, Golem Cores and Weapon Cores. I’ll talk more about those last two in a minute. Finally, the town of London City has a casino where you can play various mini-games or participate in battles where you can earn chips.

Unlike most RPGs, you need to make your weapons. Characters don’t have any equipment other than a weapon, so it’s important to make sure that they are up to date. Basically, Weapon Cores are recipes. All weapons require a certain amount of Power Gems, Mind Gems and Speed Gems for construction. These can be purchased, found in boxes that Atsuma can smash, and are rewards from battles. Golem Cores are similar in that they are recipes that allow you to create new Golems. While Atsuma is joined by other story related characters, Golems can be in your battle party. There are nearly 200 Golems to make. Most of the Golem Cores can be found in a shop, but you can also find loner Golems in dungeons. Successfully defeating them allows you to earn their core. Creating weapons and Golems is fun at first, but one of the problems with staying up to date with it is money. It requires lots of money. Most of the treasure chests in Enchanted Arms contain cash, but it’s never enough for everything. Furthermore, you will always be missing some gems to create that shiny new weapon or Golem. Luckily, the casino I mentioned makes it easy for you to rake in the dough later in the game.

While Enchanted Arms isn’t an overly difficult game, having the best stuff available makes the difference between a quick battle and a long one. Atsuma and his party will get into plenty of random encounters. Each story character can equip a variety of skills unique to them. For instance, Atsuma can equip fire-based skills, skills that use his fists and some that boost his stats. As you have probably guessed, every character has an innate element that deals double damage to its opposing element. Golems already come with skills and are unable to learn new ones. Acquiring new skills requires you to find them from a treasure chest or from a shop. Sometimes you will get them after event. However, to actually learn and use it, you need to use Skill Points that you earn in battle. Skill Points can also be used to boost everyone’s parameters. By the time you are near the end of the game, you will be acquiring plenty of SP to learn any remaining skills and/or boost the parameters of your team. Your team still levels up traditionally from experience points, but boosting parameters gives them that extra edge in combat. When a battle ends, you will lose Vitality Points. Longer battles and the more damage sustained means a higher loss in VP. Once a member’s VP is gone, they begin the battle with one HP and no EP.

Enchanted Arms has a difficulty that is dependent on how much attention you pay to your team. Keeping their parameters boosted, updating their weapons and ensuring they have the right skills for the job will keep combat fun and accessible. Atsuma and his team are on one side of the battlefield with the enemies on the other. Up to three people can join Atsuma. On your turn, you move each character in any order around a grid and select an action that has a set range. After one side finishes their action, the next side goes. This goes on until all enemies are gone. In the event you lose a battle, you can simply retry it. There are two important things to keep in mind during combat. The first is the EX Meter. This allows a character to perform a devastating special attack. The EX Meter grows while in combat, but you increase it outside of battle by hitting the R1 button and participating in a mini-game. The other important thing to keep in mind are Friendship Points. As characters participate with one another in battle, they’ll grow in FP. This means they have a better chance of performing a combo, which deals much more damage than individual attacks. One final thing to mention is that using the Standby option lets you recover Ether Points. Battle sound like they can be long or complicated, but they are simple and enjoyable.

Another aspect of Enchanted Arms that never gets boring is the look. This is one of the most gorgeous looking RPGs of all time. Even areas like the desert or a sewer look amazing. From Software created a rich and vivid world that will make anyone (myself included) stop and stare more often than not. The character models are highly detailed, Golems are unique and there are some impressive FMVs thrown in to advance the plot in stylish fashion. There is no denying that Enchanted Arms has a look that is inspiring and ahead of its time. The music is also worth mentioning. As a whole, the OST works but it’s nothing memorable. I won’t be hunting down the soundtrack anytime soon, but I will be hunting down some individual tunes. The English voice acting is a different story; I suggest choosing the Japanese option to save your ears from the over the top campiness.

Enchanted Arms is a standard 30 to 40 hour RPG, but there are some side-quests that can extend the time to 50 to 60 hours. Finishing the game nets you a new Golem Core and lets you carry over all of your stats into a New Game Plus. As fun as Enchanted Arms is, there are a few things to point out. One is that certain areas take longer than usual to load. In areas where there are enemies, it will take a few seconds for a battle to start and a few more seconds once the battle finishes. Another issue I have is with exploration. Either Atsuma runs too slow or certain areas are too big, but backtracking before you have the ability to quick-jump to previous locations can get tedious. Finally, the random battles can be a bit too frequent in certain areas. But, I’m able to overlook those issues and if you’re a fan of RPGs, you will be able to do the same. Enchanted Arms is a great game and should be experienced. I wish more developers would create games like this that help remind folks why they got into the genre in the first place.

Overall, 8/10: Overlooking a few problems, Enchanted Arms has all the classic RPG goodness one could hope for wrapped up in a shiny, modern package.