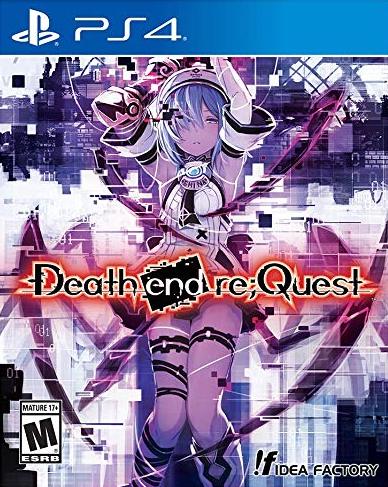 Video games from Idea Factory/Compile Heart tend to be filled with niche appeal. It’s rare to find a game that could be a contender for someone’s favorite game. Hell, even reaching the top ten would be tough. But, Death end re;Quest has managed to come close. In fact, I’ll go as far to say that Death end re;Quest is one of the best games I’ve played on the PlayStation 4. This RPG kept surprising me at every direction. Just when you think you’ve seen it all, the game continues to throw curve balls that aren’t for the faint of heart.

Death end re;Quest takes place in two places. The first is a video game developed by Enigma Games called World’s Odyssey, a VRMMORPG that has been cancelled after its lead programmer went missing. The leading programmer, Shina Ninomiya had big dreams for the game and was making excellent progress. But, no one knows where she is. So, it’s surprising to everyone when Shina wakes up in World’s Odyssey. How is it possible that Shina, who went missing the real world, is playing her unfinished game? To learn more, that’s where the second setting takes place: modern day Japan. Arata Mizunashi, the lead game programmer for Enigma Games, discovers his former colleague in the game. With Shina’s avatar/sub-conscious reunited with Arata in the real world, the two decide to get to the bottom of Shina’s disappearance via finishing World’s Odyssey. To do this, they need to reach the mystical sky capital: Odyssia.

A million questions are asked from the start. The further you get into Death end re;Quest, the more terrifying the answers become. Death end re;Quest may sound like another game inspired by .hack, but it’s much more than that. The introductory sequences will make that abundantly clear. Indeed, Death end re;Quest is a game filled with violence and disturbing imagery. Similar to the earliest Corpse Party games, Death end re;Quest relies on “telling, not showing” to convey said imagery to the players. The parallels between the story and our world are eerie. Enigma Games is funded by a company called Aggle. Aggle’s VR technology is called the Alice Engine. Arata and his fellow programmers rely on an app called Twister to keep up to date on the latest trends. World’s Odyssey is a fantasy world that has its dangers, but the real world is where the true terror lies.

As the player, you get to experience the best and worst of both. Death end re;Quest is part RPG and part visual novel. You will hop between World’s Odyssey and reality as you advance the story and uncover the mysteries. When you are in World’s Odyssey, it’ll be typical RPG goodies. Shina and her party of lovely ladies will travel through the world in hopes of unlocking the game’s true ending via reaching Odyssia. There are dungeons, camps, a merchant and the what-have-you. Since Enigma Games dropped the project, Shina will encounter various bugs and glitches in World’s Odyssey. Sometimes, these will stop you from progressing. This is when you switch over to Arata in the real world and enjoy the visual novel game play. There is lots of text to read, but the story is so damn good that you won’t ever get tired of it. Furthermore, the game will often times prompt you with choices. If you select the wrong choice, then you will get a Death End. In other words, you get a gruesome game over. The game recommends making multiple saves in order to avoid losing too much progress. Most of the time, you will be able to make a quick save before making a true life or death decision. These decisions will pop up when you’re logged into World’s Odyssey, too. 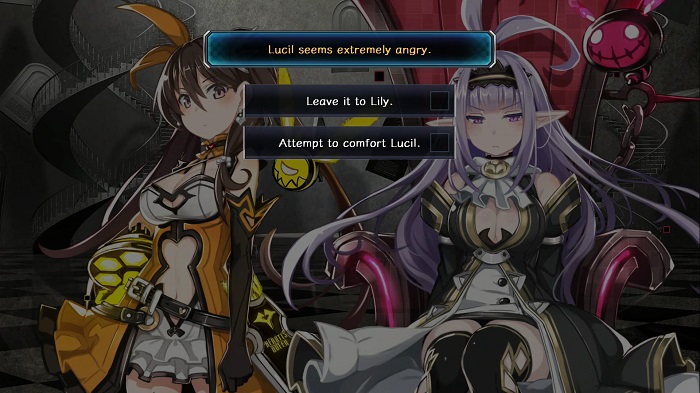 Choose wisely, or else.

Combat in Death end re;Quest will appear familiar to anyone who has played a modern day Hyperdimension Neptunia. After a battle begins, you can freely move your characters around a circular battlefield. Each character can perform three commands in a row. If your last command is an attack type, your character will perform a batter-up on the enemy. The enemy, in a sense, becomes a pinball that will ricochet across the battlefield giving damage to other enemies and taking damage from the arena’s barrier. It’s quite satisfying. Knocking enemies away is one of the ways clear battlefield bugs. Bugs appear as a shining glyph on the ground. Stepping on bugs will help and hinder your characters. It’s an interesting risk versus reward system.

As characters step on bugs and take damage, their corruption level will rise. Once it reaches 80%, they will enter the powerful Glitch Mode. Furthermore, when enough bugs get cleared, Arata can hack into the battle to provide support. This can be as simple as altering the types of bugs, or altering the genre of the battle. For example, you can turn the battlefield into a game of billiards or third-person shooter. You can even summon previously defeated bosses to aid the team. With plenty of options at your disposal to take down enemies, a classic rock-paper scissors weakness system, and multiple difficulty options, the combat in Death end re;Quest is a delight. My favorite aspect with combat is learning new skills. If you combine the right set of skills, you can unlock new ones. The game will tell you if your combination has the potential to unlock something. 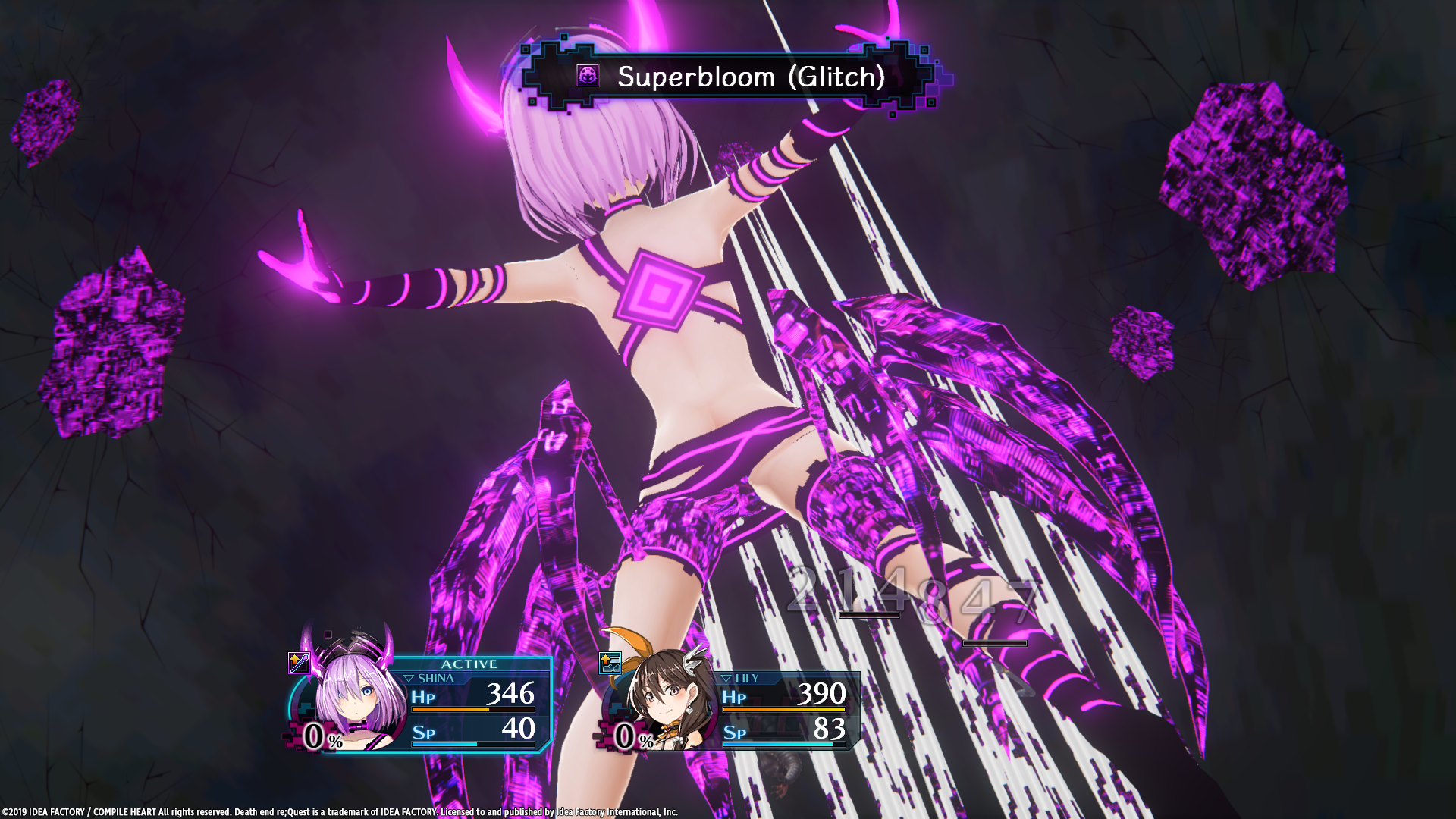 When characters enter Glitch Mode, they unlock special powers. But, are you willing to to risk it?

Death end re;Quest is a great looking game. Even if the situations are disturbing and gory, the game never stops looking good.  Shina and her team explore some gorgeous locations filled with bizarre beasts. Sadly, a few of them are hard to navigate. Even with the mini-map in the corner, dungeons that are multilayered don’t show up well. Corridors tend to be tight making battles unavoidable. These instances aside, exploring new locations is always exciting. When you get back to reality, you’ll be looking at typical visual novel stuff: static backgrounds. They’re pretty, but they could have had more pop to them. Characters are portrayed in typical Idea Factory/Compile Heart format: full sized, 2D anime characters that perform the awkward “breathing” animation. It’s a good thing the characters are designed so well. The music is forgettable outside of a few tracks. The opening theme (Caligula Syndrome) is an electric guitar fever dream that really gets you primed for the adventure. The track Alice in Waterland is a relaxing yet haunting tune filled with ambiance. The voice acting can be either Japanese or English. Both sound great, but note that the Japanese option will have more voiced scenes.

By the time I finished Death end re;Quest the first time, I was sitting at 25 hours. This includes some outside grinding (unnecessary, but I enjoyed the battles so much) and getting as many Death Ends as I could. Thanks to New Game Plus, subsequent playthroughs are easy to enjoy. Those that wish to get all of the trophies are looking at about 35 hours. Death end re;Quest surpassed my expectations. If this is any indication of what’s to come from from Idea Factory/Compile Heart, then I’m all in. Any fan of RPGs (that aren’t squeamish) should check out Death end re;Quest.

Overall, 9/10: Death end re;Quest is more than another RPG from a niche developer. Discover the truths behind World’s Odyssey and the reality behind its lead programmer’s mysterious disappearance.