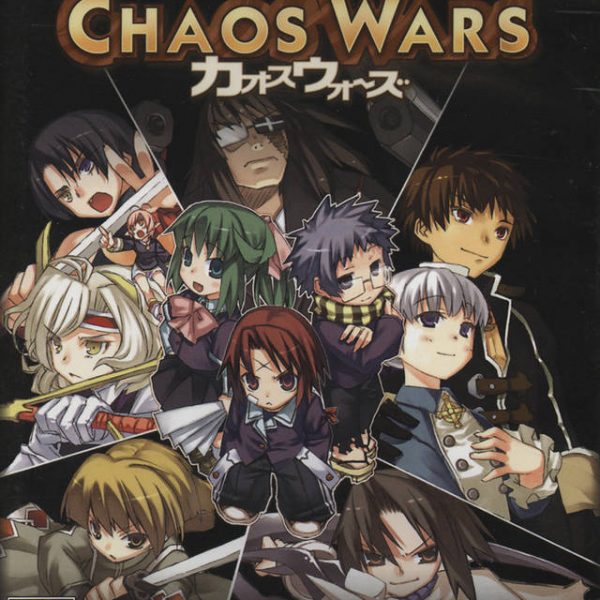 The thought of combining heroes from Growlanser, Shadow Hearts, Spectral Souls and a variety of other niche RPGs from Japan seems like it could be great idea, right? That’s what the folks at Idea Factory did with their SRPG, Chaos Wars. With a huge cast of characters, both old friends and new faces, it looked like it had the potential to be a charming but fun title. Well, looks can be deceiving. I went into Chaos Wars with little expecations, but what I got was unacceptable.

The story of Chaos Wars is about three high school students named Hyoma Kusaka, Shizuku Mizuki, and Hayatemaru Mudouin. The three of them ditch class and somehow end up in a strange world. Now they want to find out how to get home. While the story is nothing new, I will give it some credit because putting a huge cast of characters from various RPGs makes the game worth a short glance. Carmaine Fallsmeyer, Yuri Hyuga and Alice Elliot, and the maniac starring in Gungrave make an appearance and can be used in your party. However, that’s just the tip of the iceberg. Chaos Wars is a long title and, as such, you can expect to meet a huge cast of characters. Some of them come from games that never made it outside of Japan. On the one hand, that can be an excuse to research new games and expand your video game horizons. On the flipside, you’ll feel little to no connection to a variety of these folks. In most video games, you can just ignore the characters you don’t want to use. However, in typical Idea Factory style, there will be times you have to use characters in story battles. This could mean dragging dead weight if you aren’t careful.

In fact, the only reason I had an interest in this game was because I wanted to see Carmaine again. Having friends from Shadow Hearts was nice, too. Heck, a few of the original characters have some fun personality quirks that shine during certain events. However, there is just too much going on with the cast of characters, both in and out of battle.

Battles in Chaos Wars are similar to your standard SRPG. You select up to five characters and then hit the battle field that looks like it came from something like Eternal Eyes, Disgaea and/or the classic Final Fantasy Tactics. On a character’s turn you can move, use a skill, attack, use an item, retreat and swap with another character, wait or enter Realize Mode. Realize Mode is Chaos Wars’ unique battle command that makes a character’s weapon and skills change. New skills and attributes will become available in realize mode, along with upgraded HP and Skill Points. After a few turns, Realize Mode will be finished. Characters also have the ability to combo with each other for huge damage. New skills are learned via continuous use of a weapon. Furthermore, your stats will increase similar to games like Final Fantasy II and Saga Frontier with the continuous use of certain weapons. It all sounds like Chaos Wars has a solid battle system, but there is one thing that makes the battles go from fine to abysmal.

Boss battles are simply awful, awful struggles of woe and sorrow. Most bosses have a red bar underneath their listed HP. In order to knock down a boss, you need to deplete both the red bar and the regular bar. Otherwise, any damage you dish will be healed automatically on the boss’ next turn. I understand the need to create a fun sense of urgency when it comes to fighting bosses, but their regeneration coupled with the fact that you sometimes need to use characters that barely saw a battle makes for frustrating and agonizing struggles.

Even more agonizing is the music and voice acting. While some of the songs get the job done, the majority are forgettable. The voice acting, however, is the worse voice acting in a video game. Ever. Seriously, when you hear what they did to characters like Yuri and Grave, you will want to fly to Santa Clara, CA and find O3 Entertainment’s staff and beat them with a steel bat. Thank the heavens you can switch to Japanese voice acting. Even with the option the voice acting was unforgiveable. The graphics in Chaos Wars are boring, but there are some skills and spells that are as over the top as you would expect. Most of the time, it looks like you’re playing a game from the Playstation instead of the Playstation 2.

Like I said, Chaos Wars can last up to 60 hours. The content is there, but actually seeing the best ending will require a guide. Otherwise, you will end up with a lame ending and have to start from scratch. The only reason I looked into this obscure title was because I saw that characters from Growlanser made an appearance. Unfortunately, Carmaine and his stylish self weren’t enough to make the game worth it. I say avoid Chaos Wars, no matter how many characters from your favorite games make an appearance.