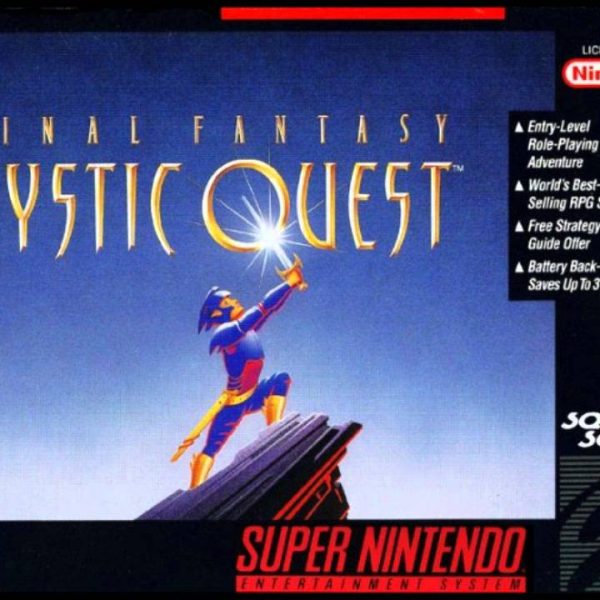 Final Fantasy Mystic Quest’s reputation seems to be more famous than the actual game. Labeled as an “entry level role playing game” Mystic Quest gets a lot of flak for its basic story, its simple game play, its graphics and its short length. Having just finished the game for the first time, I can see where some of the criticism comes from. However, I really enjoyed my time kicking it old school and saving the world in a simplistic way. In a world of RPGs with complex systems, the ability to fully customize nearly every aspect of your character, over the top narratives and an abundance of fetch quests, it was relatively pleasant going through Mystic Quest. Of course, it’s not without its flaws.

One of the biggest flaws is the story. As soon as you begin a new game, you’ll see the main character run from a crumbling structure and meet an old man. The old man will mention that this main character, known as Benjamin in the instruction manual, needs to fulfill an ancient prophecy by restoring the light to four crystals. And that’s it. That’s how the story begins. From there, Benjamin will meet a variety of characters that offer quick quips about the current situation but the dialogue in Mystic Quest is terribly scarce. The writing is often times humorous, but there is so little of it that there might as well not even be a story in the first place. Benjamin looks like he’d be a smart-mouthed hero, but his one-liners are easy to miss. I love the classic “restore the four crystals narrative” but there should have been much more to it.

Benjamin’s quest takes place on a single continent. The world map uses a simple point and click interface, which means you don’t have to worry about random encounters as you slowly but surely travel from one point to the next. Much like the story, the world map and the locations you visit are scarce. There are only four towns, not that many more dungeons, and a variety of connectors that you need to travel through in order to proceed. Towns have a few folks that you can speak to, some of which will sell you items. Since there are no shops, it’s important to talk to everyone you meet because a good chunk of them might have something to sell. There’s not much else to do in towns aside from talk to the right person and head over to the next dungeon.

Dungeons have more to them than meets the eyes. At the start of the game, Benjamin has a sword. As he meets more characters (some of which join him) he’ll get an axe, a claw, and bombs. These weapons double as tools. The axe can chop down trees or hit switches. The sword can be used to pierce hidden triggers. Bombs are used to blow up walls or create new passageways. The claw lets Benjamin scale walls. Eventually, the claw will get upgraded to a grappling hook. While the dungeons are straightforward, they provide more than just a simple hop, skip, and jump from one point to the next.

Each dungeon has an enemy in a preset location, which means that there aren’t any random battles. Finishing a battle will remove that monster for the entire duration of your visit. When people see that there aren’t any random encounters, usually they get excited. Unfortunately, most enemies need to be killed in order to proceed through the dungeon. You can’t jump over them, running away doesn’t work clear them and there aren’t any items to remove them. While there is a fair amount of backtracking in Mystic Quest, there are times when it feels like you might as well be playing a game with random battles.

Battles themselves continue the trend of being simple. Benjamin (and his partner, depending on the story) will face off against up to three enemies in each battle. You can attack with one of the above mentioned weapons, use magic, use an item, defend or run away. Instead of magic points, magic is separated into three categories, each with a number of uses: white, black and wizard. Each category contains four spells which are learned by finding them in treasure chests. White magic is mainly used for healing, black magic has a spell for the four elements and wizard magic has super powerful favorites like Flare and Meteor. Most of the time, battles are over within a matter of seconds. Sure, there is a chance that Benjamin and his partner will get petrified, or maybe knock each other out due to the confusion statues, but you can opt to restart the battle and try again. Boss battles are similar with the difference being the enemy having more health. Healing is never an issue: you will always have more than enough supplies to restore your health, status and magic. This is because chests that hold items that are brown refill with every visit. This applies not only to dungeons, but to towns as well. In other words, you can get 99 of each item once you find it in a town (or dungeon if you’re so inclined) as soon as you wish. Furthermore, battles are made even easier by the absolute destructive potential of magic. Weapons can be effective, but you can send a group of foes to their demise in one turn with a casting of Flare or White. After winning a battle, you will earn experience and money. Benjamin can level up whereas his partner will stay at the level he/she started with. Obviously, Mystic Quest is trivially easy, but there is something fun about running through a dungeon and clearing out every enemy sprite in your way. Discovering the contents of a red treasure chest is exciting because chances are it’s a new spell or piece of armor. If for some reason you can’t get enough of the battle system, there are battle icons on the world map that task you with finishing 10 battles. You will earn a reward after the last battle.

As mindless as Mystic Quest is, there are certain things about it that have stood the test of time. The first is the soundtrack. From the opening theme to the final battle theme, the collection of music is fantastic. If you aren’t able to stomach the game’s old-school game play, at least give the music a chance. It really is that good. The graphics will likely divide people. I enjoy the small 2D character sprites demolishing giant enemies that change their appearance as they receive more and more damage. I enjoy the retro looking backgrounds in the towns and dungeons. I enjoy the comical effects of spells such as Blizzard and Fire. Others might expect more from the Super Nintendo. There is no doubt that more could have been done with the presentation, but it gets the job done and slightly adds to the game’s charm.

I was able to finish Final Fantasy Mystic Quest in nine hours. There are no side-quests, no secret bosses, no hidden scenarios and no New Game Plus features. Even with all of the battling, the game is short and has no replay value. And yet, despite all of my criticisms and all of the game’s issues, I still recommend Mystic Quest to fans of RPGs. It offers nothing ground breaking to the genre in terms of gameplay and the story is barely worth mentioning due it barely being mentioned itself. But, I had a great time going through this mystic quest and if you are a fan of the genre, chances are you’ll find something redeemable that pushes you towards the end.

Overall, 6.5/10: Final Fantasy Mystic Quest is as modest as they come, but it has some special moments that will keep you moving forward. Also, that music!