The year is 1997. The time is probably in the middle of the afternoon. The place is study hall. The object in my hand is a video game magazine because reviewing a social studies book was boring. I turn to a full page advertisement for Albert Odyssey: Legend of Eldean. I see anime art. I see screenshots of turn-based combat. I see 2D sprite deliciousness. I see a colorful adventure. I see that its for the Sega Saturn. CRAP! A system I don’t have! A system I don’t plan to have! What is an RPG fan to do when your options are so limited and right in front of you is a game you want to play more than anything? You don’t do much, except suffer, maybe hope your allowance will be saved long enough to pick up both the game and the system. Or you don’t do anything at all except feel melancholy. Maybe some day it will get played from start to finish. Well, lo and behold, that day has come. Recently, I finally -FINALLY-purchased both the game in review and the respective system. A Working Designs translation and classic game play came together and my wait was worth it. 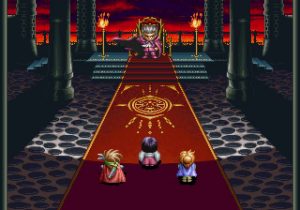 That’s right, folks. Working Designs published this game during their prime. Well, I’m not sure if they had a “prime” but they were going strong with their translations of various RPGs. For those who were anxiously awaiting the three year long (typical Working Designs) translation of Magic Knight Rayearth may remember Albert Odyssey as being the “appetizer” before the “main course.” When it comes to a good script from Working Designs, Albert Odyssey is no exception. It takes place in a fantasy world where evil dragons and magical swords that talk exist. Legend tells a tale of three children gifted with magic fighting a black dragon named Vlag. With Vlag’s defeat came an intense case of sibling rivalry as the three siblings battled over world domination. After this introduction of the Eldean legend, you meet our hero, Pike. After an assault on his village by goblins, infant Pike is left to die alone. However, he gets rescued by a woman with beautiful, white wings. Raised by harpies in the cleverly descriptive Harpy Forest, Pike and his foster-sister/rescuer Laia enjoy a peaceful life. At his side is Pike’s magically animated sword, Cirrus, a legacy of Pike’s father. The talking sword Cirrus and Pike are fetching water when a dragon riding sorcerer snatches the forest’s magical crystal and turns Laia to stone. Pike begins a quest to undo the stone curse, but his quest will turn out to be much more than a simple one undoing a wizard’s wraith. The script is a simple one in theory, but thanks to the folks over at Working Designs, characters are fleshed out, have more depth, and have plenty to say. Despite the fact that this is a mid-nineties title, the pop culture references and ridiculous NPCs never seem out of place. Heck, some are still relevant to this day. Humor is one of Albert Odyssey’s strong points, and you’ll soon come to realize that within moments of playing. The plot itself is one you might be familiar with, but the characters are much more original and endearing. By the time the game ends, Pike and his crew are an unforgettable bunch.

When you begin your quest, you’ll immediately become familiar with the controls. The menu lets you look at your stats, use items and magic, and manage equipment. In the towns, you can examine pots and chests to find items, speak to the townsfolk, rest at the inn, save your game, shop and advance your quest. Exiting a town brings you to a classic RPG feature: the world map. Ah, how long has it been since I set foot on a world map? Too long! On here you can move to your next destination on foot or, later in the game, on your airship. If you’re not headed to a town, a dungeon is likely on your to-do list. Some can be annoyingly maze-like by design and the random encounter rate will make you yearn for something that prevents encounters. But, it wouldn’t be old-school without either of the two above features.

Battles are turn-based but fast paced. Your party can attack, defend, use items, and use magic. Gryzz, the awesome dragonman, can use breath attacks instead of magic. Amon, the fabulously flamboyant half-breed birdman has an attack that slices all enemies on screen in place of a magic command. Features like this and the fact that each character has a strength and weakness are what make each battle exciting. The old-school necessity of level building does become important, especially near the end of the game. Luckily, monsters give generous amounts of experience and with a plethora of characters being well versed in magic, killing multiple foes is a breeze. Once a battle ends, the party will receive experience and money. Leveling up may teach you a new spell alongside the obvious increase in parameters. It is old-school combat at its finest and rarely grows stale.

Albert Odyssey’s look takes full advantage of the Sega Saturn’s 2D capabilities. The anime inspired world and its dwelling sprites are colorful, vibrant and animated to perfection. Who needs elaborate 3D cut scenes when the 2D sprites have enough flash and pizzazz to get the job done fine. Battles are no exception as you watch your characters duke it out with their weapons swinging and their magic blasting. The music and sound in Albert Odyssey fits perfectly. With the exception of the grating boss theme, the sound track is a great one. There is little voice acting, but what’s there gets the job done fine. There is an introduction sequence that is fully voiced, and a certain event in the middle of the game will also have some voiced narration. It doesn’t add much to the experience, but it was nice addition. When you consider how muted most RPGs were around that time, hearing some voices was refreshing. Albert Odyssey presents itself well with its graphics and music.

The unfortunate thing about Albert Odyssey: Legend of Eldean is that it feels over too soon. Even with level building and a bit of backtracking, I finished off the last boss around 25 hours. Perhaps its a good thing that I didn’t play it when it was first released because, at the time, RPGs were so scarce. Albert Odyssey also suffers from some loading issues while on the world map and a boss fight that will make you rip your hair out. Those aside complaints aside, I still recommend this game to anyone who missed it back when the Sega Saturn was still around. Fans of old-school RPGs who wish to relive a simpler time will enjoy it the most, but others who enjoy basic, pick-up and play style RPGs will enjoy it, too. I’m so glad that I finally got to play Albert Odyssey: Legend of Eldean. It had nearly everything a fan of RPGs like myself could hope for. Seek out this little gem of a game if you get the chance so you can explore a well-crafted fantasy.