Two great games for the price of one. Newcomers and veterans alike will enjoy the commencement to the world of Ys. 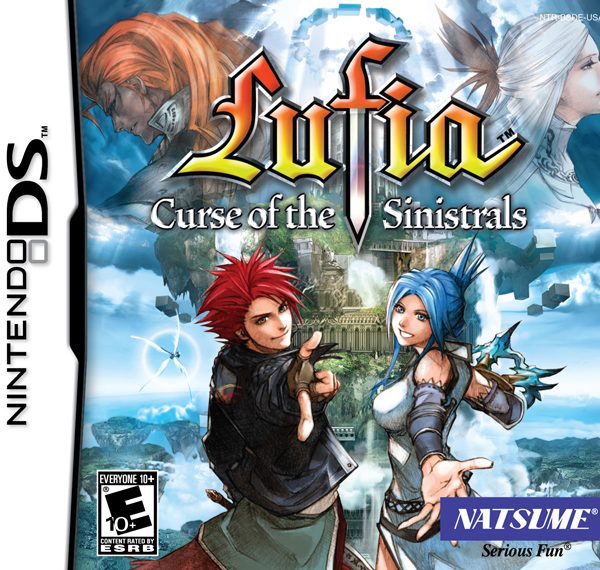 Change is hard for everyone. This applies all facets of life. Of course, video games are included. When it was announced that Lufia II: Rise of the Sinistrals would be “reimagined” as an action-RPG for the Nintendo DS, you could cut the apprehension with a knife. At the time, I didn’t have an interest in the Lufia franchise so I didn’t care about the game one way or the other. Now, I recognize and respect the series. I feel bad for taking so long to go through its games, specifically Lufia II. The follow up to Fortress of Doom is often considered to be the best in the series. Lufia: Curse of the Sinistrals tried to retell its story in a modern, current way. For the most part, it was a success.

If you played the first Lufia, you know about the initial sequences showing Maxim and his friends in an epic battle against four evil beings known as the Sinistrals. Curse of the Sinistrals shows you where all of this drama began. The game starts with an ominous scene in which the Sinistral Gades announces his plans to rule the world through power. Maxim, a prodigy with the sword and all around good person, and his friend Dr. Lexis happen to encounter Gades while on an excursion. Miraculously, Maxim survives the confrontation. A priestess of Runa named Iris heals Maxim’s wounds and tells him that Gades must be stopped. Answering the call of adventure, Maxim and his best friend Tia begin a journey that will impact the fate of the world. If you’ve played the Super Nintendo version of the game, then you’ll be happy to know that the script was updated to feel more fresh and current. The writing in the original was fine, but now the characters have more personality and isms that make the cast well-rounded and easy to like. One of my favorite things about the story is that the Sinistrals also have much more personality. You’ll actually get to learn more about them instead of seeing them as talking heads that represent evil.

Curse of the Sinistrals tells the same story as Rise of the Sinistrals, but the similarities stop there. As mentioned earlier, Curse of the Sinistrals is an action-RPG. The game relies on quick reflexes and it’s new features to achieve victory. One big change that you’ll notice is a lack of a world map. Now, you simply point and click to your next destination. Personally, I found this to be a good decision. It saves time wandering around a barren map and gets you to your next destination quicker. In a town, you can chat with NPCs and shop for gear. To go along with the livelier script, the NPCs have much more to say in Curse of the Sinstrals. It’s fun to talk to them during multiple points in the story to hear their perspectives. While shopping, you’ll notice that there aren’t as many items in this game as there were in Rise of the Sinistrals. You can only carry up to nine healing items at a time. Again, I like this because the series has a tendency to pile on useless items. Characters can equip a weapon and one piece of armor. However, the customization doesn’t stop there.

Throughout the game you will find magic stones that can be placed on a giant grid. Each character has their own section of the grid. By placing the stones on the grid, their base statistics will gain a boost. Some stone can be combined with one another in order to make them more potent. With proper placement of magic stones, your party of warriors will turn into a six-person wrecking crew of devastation. You’ll find plenty of these stones throughout the game so it’s important to place them or combine them as soon as you can.

To see these stones, weapons, and armor in action, you will need to head to a dungeon. This is where Curse of the Sinistrals shines. Each dungeon has a puzzle that requires you to utilize one of the characters’ unique specials to advance. Sure, there will be times you need to push a block or flip a switch, but there will be times you need to use Tia’s Hookshot and then switch to Artea’s Wind Rider. When monsters pop up, the real fun begins. Every character has a special combo that they can use by mashing the attack button. Different weapons let them have different charge attacks that cost IP. Character’s have an IP meter that gets drained as specials are used, but it refills at a steady rate. Sometimes, enemies will turn red. This means that they won’t flinch when attacked. It’s important to know when to retreat or when to keep attacking. When an enemy falls, they’ll start dropping money and experience orbs. You can continue to attack them to continue gaining more and more rewards. Watching your character perform hit after hit so that copious goodies pours out never grows old. Plus, it’s rewarding.

During boss battles, you need to use a bit more strategy. This often times works against the game. There are some bosses that play more like a puzzle instead of an actual fight. Most of the bosses have more HP than necessary, too. In the event you get a game over, you have the chance to retry and gain a five level boost. I like this because it means Curse of the Sinistrals will be playable for everyone. If you want a challenge, then you can just retry. If you just want to progress with the story, you can retry and gain some levels for free. There is no harm in using this feature, either. Still, better boss fights would have been welcome.

Another feature that would have been welcome would have been a better presentation. Like every other DS game that decides to venture to the third dimension, Curse of the Sinistrals looks ugly. The new character art is gorgeous, but the actual character models are distorted, blocky and rough. Some of the areas you need to explore aren’t well designed, either. This can cause some aggravation when trying to jump over a pit or find a door. If there was a way to keep the 2D look from Rise of the Sinistrals, but still incorporate this game’s action game play, then I would have no complaints. The music has, for the most part, remained unchanged. If you enjoyed the soundtrack in the original, then you’ll enjoy what gets played in this.

In true Lufia fashion, you can explore The Ancient Cave to find powerful items. These can be carried over to a new game. Finishing Curse of the Sinistrals once will take about 20 hours. This is a game that epitomizes short and sweet. Despite my short time with it, I was ready for it to be over. As a fan of the Super Nintendo classic, I didn’t know what I was in for when I started Curse of the Sinistrals. What I got was a fast-paced, well-written game that will hopefully usher in some new fans of Lufia. Even if it doesn’t do this, it’s nice to see that the developers didn’t sully the legacy of Lufia II. Lufia: Curse of the Sinistrals is a solid action-RPG in its own right.

Overall, 7/10: If you ignore its ugly look, Lufia: Curse of the Sinistrals delivers a fun, action-packed adventure that does right by its Super Nintendo original.