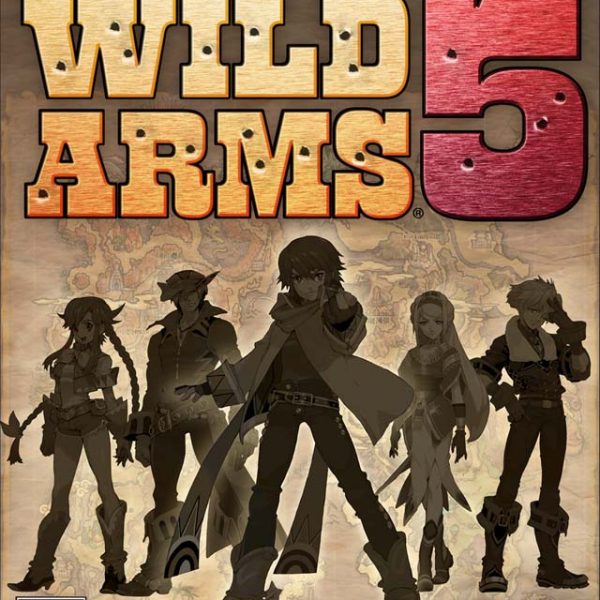 When Wild Arms 5 was first released in America, I was not invested in the series. “What?! Another Wild Arms game?! PFFFT! I ain’t got time for that!” Of course, that changed a few years later. If you look at (shameless plug approaching in 3, 2, 1…) my review for Wild Arms 3, you’ll see that I eventually ended up giving the series a chance. Not only did I give it a chance, but it became one of my top RPG franchises of all time. As the final numbered entry in the series, Wild Arms 5 had to go out with a bang. I wouldn’t call it a bang, but it was enjoyable romping through Filgaia for a final time. The greatest thing about Wild Arms 5 was that there were so many little things that make it worth playing, especially if you have been involved in the series since the beginning. Unfortunately, there were a few problems. Let’s take a look, shall we?

We are back in the world of Filgaia. It’s a world full of six-shooters, cowboy hats and those things you wear on your boots that look like shurikens. Stirrups? I think that’s right. Yee-haw. Etc. Our story stars the annoyingly energetic Dean Stark. Ever since he dug up a bolt from a Golem, Dean has dreamed of excavating and controlling one of these giants made from ancient technology. It so happens that his chance arrives when he and his best friend Rebecca Streisand witness a Golem’s arm plummeting from the sky. Embraced in this monstrosity is a young girl named Avril Lav—er…Avril Von Fleur. With no recollection of who she is, Avril says she must find someone named Johnny Appleseed. The three set off on an adventure that will take them across Filgaia and beyond. As usual, you don’t need to have played any of the previous games in order to understand the story. However, it is recommended that you do for one very important reason. Sure, the story itself is standard RPG stuff with world saving, plot thickening and some bad-ass villainy. But, the best thing about the story is that every main character from every previous Wild Arms game makes a cameo appearance in Wild Arms 5. Some have side quests for you, some give you advice, and some are just there to look pretty. Seeing all of these familiar faces shows you that Media.Vision took their time in developing the world of Filgaia for this installment. Despite Dean being one of the most annoying dudes ever, the story in Wild Arms 5 is made better thanks to the rest of the cast and the vast amount of cameos.

Other bits and pieces of previous Wild Arms installments make an appearance for the new cast, as well. These include little things like the way conversations play with traditional text boxes to major things like the HEX battle system. The world map is back, and the search system along with it. While you don’t have to use it to find towns and dungeons, you can use it to find hidden treasures and hidden bonus areas where you solve puzzles. Towns are full of locals who have plenty to say thanks to XSeed’s translation. Towns also provide you with shops for weapons, armor, badges and items. There are no inns; you can recover your energy at save spots that are scattered throughout the world map, dungeons and in the towns. These save spots also provide hints for your next destination and allow you to fine-tune your character’s ARMs with Dragon Fossils. Battles are essentially the same as Wild Arms 4, but with some minor tweaks. You can move and act in one turn, and your characters can equip Mediums to gain access to a variety of spells and skills. Finding the right Medium for your character is one of the fun challenges provided in Wild Arms 5 because each character has a strength and a weakness. Not all of the fighting will be done with your three person party, though. At one point, you’ll acquire a mighty Golem that provides you with the ability to travel over shallow water and Faclon Punch any enemies in your way. Unfortunately, Golem battles can drag on due to the fact that you have no control over them. You can set up your Golem’s skills and attacks, but the AI takes over during these battles. Aside from that, battles are just as great as they were in Wild Arms 4. They combine strategy and quick thinking, and provide a unique challenge every time.

With all of this good stuff, I can’t help but to wonder why there were some other essential Wild Arms traits left out. Examples include no longer being able to name your spells, a three person instead of a four person battle party, and no opening anime sequence. This last one is what made me the most upset. There are a few other minor annoyances, as well. While Tools didn’t make a return in the traditional sense, Dean has access to a variety of bullets such as fire, ice and a grappling hook. Personally, I liked it when you had different tools for the different characters. There are tons and tons of puzzles littered in the dungeons of Wild Arms 5 and will require Dean to use his bullets appropriately. The dungeons in Wild Arms 5 are similar in exploration to Wild Arms 4 in that it utilizes action and platform elements. Personally (again), I prefer my RPGs to have little to no platform jumping. Like I said: these are minor annoyances.

Finally, we come to the audio and visual section of the review. The graphics look like those found in Wild Arms 4. The character models and monster models are a combination of 3D technology and classic, Japanese animation. They are expressive, colorful, and easy on the eyes. The same can be said about the environments, be it a town or a dungeon. Even the world map looks nice. Filgaia is looking much greener these days, so it’s a nice a change of scenery from Wild Arms 3’s desolate wasteland as well as the lack of a world map from Wild Arms 4. My biggest complaint about the graphics was mentioned already: the lack of an opening anime sequence. The music in Wild Arms 5 is some of the best yet. As far as holding true to the Wild West theme, this game does it the best. Most of the town’s tracks sound like they belong in a Clint Eastwood film from the 1960’s. Battle and world map music is top of the line. Out of all of the games in the series, I feel that this one has the best music. It also has some of the best voice acting!! …ok I’m joking. Only a few of the characters sound fine. Dean is made more annoying due to him being voiced by Yuri Lowenthall. Carol Anderson, who is a 12 year old genius, sounds NOTHING like a 12 year old genius. Shame on you, Mona Marshall! These are just two of many examples. At least Wendee Lee’s voicing of Rebecca does a standout job. All in all, Wild Arms 5 looks and sounds great despite a few areas that need a bit of work.

Dean and his ragtag group of heroes have a lengthy, 40 to 50 hour quest ahead of them. With bonus dungeons, side-quests, secret bosses (Ragu O’ Ragula is back) and hidden extras, you can plan to add another 10 to 15 hours of game time. Completing everything the game has means putting up with Dean’s shenanigans longer. Still, it’s a small price to pay considering the amount of fun to be had. As the (hopefully not, but I’m not holding my breath) final entry in the Wild Arms series, Wild Arms 5 delivers something special. However, it will feel more special when played by the folks who have been following the series since its debut on the Playstation. Thus, I recommend this game for fans of the series. Sure, you can pick up and play this one if you are looking for an RPG to last you a while, but seeing familiar faces and features from previous Wild Arms titles in an all new story for Wild Arms 5 makes the title much more enjoyable. The wild west may have never been anything like the Wild Arms series. That’s a real shame, because from Rudy to Dean, the world of Wild Arms never stopped being fun.