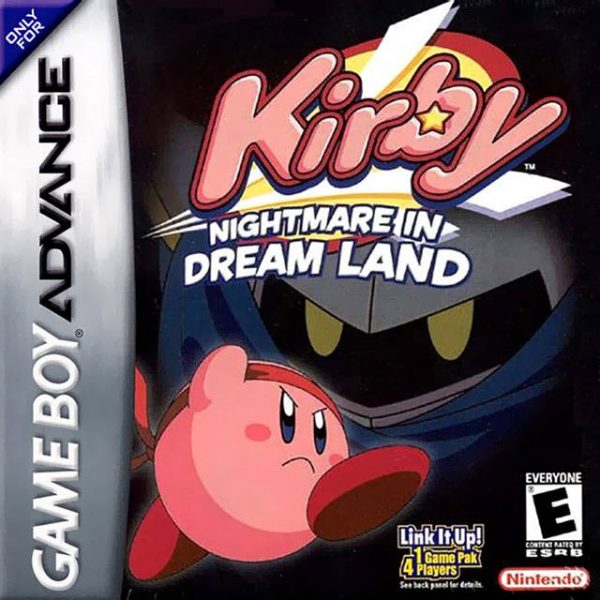 One of my problems with Kirby Super Star is that it set the bar for what a Kirby title could do. Subsequent titles had some big shoes to fill after witnessing all Super Star offered. Kirby’s Dream Land 3 was fun, but it had some issues. Kirby 64 was the same way. Unfortunately, Kirby: Nightmare in Dream Land follows this trend of not reaching that next level of fun that Super Star provided. While still enjoyable and highly recommended to Kirby fans, especially those that played Kirby’s Adventure, Nightmare in Dream Land is a basic journey that could have had more given the possibilities available on the Game Boy Advance.

If you played Kirby’s Adventure, then you know the narrative of Nightmare in Dream Land. If not, it’s simple: in Dream Land, the Fountain of Dreams grants the citizens the ability to dream happily. However, people have lost their ability to dream after the fountain’s Star Rod went missing. Kirby is on the scene. He will have to battle a variety of enemies and rulers in order to recover the missing Star Rod and restore happiness back to Dream Land. A simple story like this is classic Kirby.

Similarly, the game play follows this level of simplicity. Again, if you played Kirby’s Adventure, then you are already familiar with what to expect. Kirby’s arsenal is back for this GBA enhanced port. He can walk, run, slide, swim, float and fire puff balls. His copy ability, which was first introduced in Adventure, is his most important ability. By inhaling certain enemies, Kirby can copy their ability. Swallowing a Waddle-Doo will let Kirby fire a beam. Swallowing a Rocky will let Kirby turn into a stone. Does this sound familiar? It should, because the game play is an exact replica from Kirby’s Adventure.

In some ways, this is a nice return to a simpler time when Kirby was still trying to figure out his place amongst Nintendo royalty like Donkey Kong and Mario. His copy ability, which was somewhat unique at the time, let gamers figure out their own play style with the variety of abilities available. On the other hand, the simple game play feels too basic. Aside from Kirby’s fantastic UFO ability, each copied power only has one (at most two) attacks. In Super Star, Kirby’s cutter ability let him perform a combo, a downward thrust, a dashing slash and throw the cutters in specified directions. Similarly, his cutter attack would be altered depending on which friend he paired with Dream Land 3. In Kirby 64, he could combine the cutter with other abilities for bizarre and clever results. All of his abilities in Nightmare in Dream Land are the same as they were in Adventure. Aside from a few needed for solving puzzles, you’re better off using Kirby’s regular attacks to make it to victory. This coupled with the fact that enemies act like kamikaze pilots and try to slam into him constantly means that he’ll lose a skill quickly. While each stage is relatively short and finding each secret is fun, the lack of variety on a supposed enhanced port feels like a slap in the face.

In fact, the only thing that will stand out from Kirby’s Adventure is the graphical presentation. Nightmare in Dream Land is more expressive, more vibrant and more animated than its Nintendo counterpart. Kirby will get to wear a variety of adorable hats based on the copy abilities. A personal favorite has him dressed as an Eskimo that looks just like Popo from the Ice Climbers. It’s a wonderful game to behold; the game truly pops on the tiny portable. The music sounds the same, but there are a few new sound effects. It’s nothing extreme, but it’s still a nice addition.

Actually, “nice addition” is the best way to describe Nightmare in Dream Land. There is nothing that this port does wrong, nor is there anything that it does that will knock the puff out of you. It’s just a simple way to pass time with your favorite, pink mascot. Finishing the game with 100% completion will only take a few hours. There are some bonus games and a hard mode to challenge, as well as a super challenging boss rush mode. I think the best thing that it does right is show you Kirby’s humble beginnings. In comparison to how he was in the first Dream Land, he’s come a long way. However, the same can be said of Adventure. Kirby: Nightmare in Dream Land is a return those humble beginnings, but with a fresh coat of paint. It’s enjoyable, but just like Kirby’s appetite, you’ll be left wanting more.

Overall, 6.5/10: Kirby: Nightmare in Dream Land is supposed to be an enhanced port of a classic. Unfortunately, it wasn’t enhanced very much.